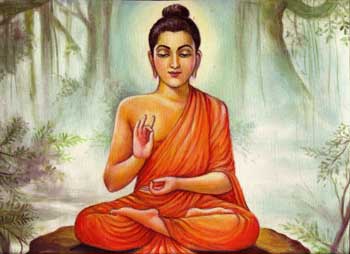 One day a young man went to Buddha and seemed very upset. Buddha asked him reason. Young man told him that his father has died and he wants to perform best after life rituals for his father and despite of his father’s good or bad actions in his life, he wants his father’s soul to go to heaven.

He said, “I could have gone to any ordinary priest but I have come to you with this request. I want you to perform after life ritual for him so that in his after life he can gain entry to heaven and permanently resides there.”

Buddha listened to man and said, “Go to market and buy two earthen pots. Also bring some butter and some pebbles to fill in the pot.”

Young man went to market and bought them, thinking that this was for ritual. Then young man filled one pot with butter and another with pebbles and sealed them.


Buddha them told him to put them in a near by pond. Young boy did as said and both pots sank to the bottom of pond.

Now Buddha asked him to bring a stout stick and strike both pots and break them open. He did so, thinking that now the Buddha would perform a wonderful ritual for his father.

As young man hit pots and break them open, the butter escaped from first and floated to the surface where as stones from other pot settled at bottom.

Buddha said, “I have done this much. Now call all your priest. Let them come and pray — ‘Oh pebbles, rise to the surface.. Oh butter, sink to bottom..’

Young man replied, “Are you joking? How is it possible? It is against law of nature. Pebbles are heavier than water, they are bound to stay down, can’t float where as butter is lighter than water, it is bound to float, cannot go down.”

Buddha replied, “Young man, you know so much about nature yet you do not want to understand the law that is applicable to one and all.

Our Difficulty is that we think that some Invisible Power will somehow favor us, even though we do nothing to Change our own Behavior pattern, our own Actions.

We should understand that This is eternal law of Nature – Fruits depends on our actions. Therefore we must be careful about out actions in daily life and do only Good.”