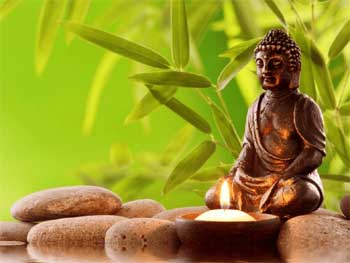 Once Buddha was visiting a small village. There people got to know about his visit and started to come to him about their problems.

One day, some people brought a blind man to him and said, “He is blind. We are his closest friends. We told him about light but he is not ready to accept the fact that there is light.

His argument are such that we are at loss. Even though we know that there is light, we have to admit defeat. He tell us that he wants to touch light. How can we make it possible for him to touch light?”

Just then blind man said, “OK, if i can not touch it. I have ears, make sound of light, so that i can hear it. It it’s not possible to even hear it, then i want to taste it or if light has fragrance, i want to smell it.”


His friends said, “There is not way to convince him. Light can only be seen with eyes and he has no eyes. He complains that village people are unnecessarily talking about light just to prove he was blind. He felt that we invented the story of light just to prove him blind.”

Blind man friends asked Buddha if he could make him understand about light.

Buddha replied, “I am not going to try to convince him. Mankind problems have been created by people who tried to explain things to those who can not see. I won’t make that mistake. I will not explain to a blind man that there is light. You have bought him to wrong person.”

Buddha replied, “There is no need to bring him to me. Take him to instead to a physician who can treat his eyes. He does not need preaching, he need treatment.

This is not question of explanations or of him believing things you tell. If his eyes get cured there will be no need for you to explain. He himself will be able to see and know light.”

Friends understood what Buddha said and took blind man to a physician for treatment. Fortunately he was cured after few months.

By that time, Buddha had already left that village. Blind man followed him and bowed to Buddha and said, “I was wrong. There is light but i couldn’t see before, therefore i didn’t believe anything about light.”

Buddha answered, “You were certainly wrong but your eyes got cured because you refused to accept or believe what others told you, unless you experience it for yourself. If you had accepted what your friends had told, then matter would have ended there and no question of treatment for your eyes would have arisen.”

Learning:
One should Search his Own Understanding because one can not Attain anything by Worshiping the insight of another. Search of Someone’s own Understanding can only Begin when one Drops Idea of Other.