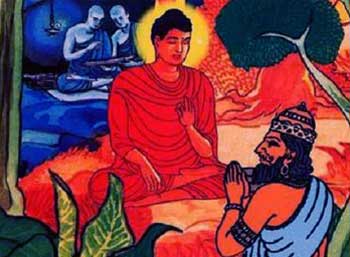 Once a great King decided to go meet Buddha for first time. His wife had been a lay-disciple of Buddha for long time even before she was married to King.

When Buddha came to King’s capital, wife said to King, “It doesn’t look right that when a man like Buddha comes to your capital, you won’t even go to welcome him. Therefore, i am going. When i meet him, he is sure to ask about you. What should is say then?”

King thought for a moment and said, “OK, I will also come to welcome him to our kingdom but i am meeting him for first time, i would like to give him some present.”

King then proudly said, “I have a very precious diamond, no one else have that. If i take it as gift then Buddha will appreciate it.”


Wife started laughing and said, “Rather than diamond, it would be better if you take just a fresh lotus flower from pond. I have known and following him for long, therefore i know that to Buddha lotus flower is more beautiful than a diamond. Buddha is a Sanyasi, what will he do with diamond. It will be an unnecessary burden.”

King replied, “OK, then i will take both and let us see what Buddha will take and who wins.”

Buddha was going to start his morning talks, surrounded by thousand of monks who were waiting to listen to him. Just then King came on his golden chariot to the commune of Buddha.

King stepped out of his chariot and walked toward Buddha. With him he was carrying gift for Buddha. He bowed down to Buddha and offered him the diamond.

King knew that diamond was very precious and it was very difficult for him to drop his diamond. Buddha again said, “Drop it.!”

He hesitated but he was surrounded by thousand of monks and listening to those words, he had no other choice. So King dropped it.

Then King offered the lotus flower to Buddha.

King thought, “Is this man crazy?” and dropped lotus flower too.

King replied, “But both my hands are empty. Now what do you want me to drop?”

At that moment, one of old disciples of Buddha said,”You don’t understand. Buddha is not asking you to drop things you are holding in your hand.

Buddha is saying – Drop your personality, Drop that your are King, Drop this mask, Be just Human because through the mask it is impossible for Buddha to approach you.”

King never thought about it. But then great silence and King felt something and spontaneously fell at the feet of Buddha.

Now, Buddha said, “That’s what i have been telling you: Drop it. Now sit down. Be just human, here nobody is emperor, nobody is beggar. Here everybody is himself. Just be yourself.”

You May Also Like: Zen Stories on Self Awareness

Search Keywords: Buddha and King Story – Be Yourself Self Awareness Buddha Short Story, Buddha Teaching Story about Arrogance and Being Proud