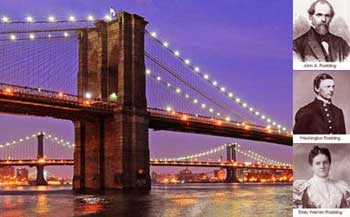 It’s story of a creative engineer named John Roebling who build the Brooklyn Bridge in New York despite of all the rejections and circumstances he had to face.

In 1883, Engineer John Roebling had an creative idea to build a spectacular bridge to connect New york with Long Islands. He presented his idea to experts but they thought that it was impossible feat and asked him to forget the idea. For them it was a impractical idea as anything like this wasn’t done before.

But John couldn’t let go his vision and in his mind he knew that it could be done, He just had to share this idea with someone else. After sometime he was able to convince his son (an upcoming engineer) that ths bridge could be built.

For first time working together John and Washington (his son) developed the concept of how it’s going to build step by step by overcoming obstacles. With excitement and inspiration, they head towards their challenge and hired a crew to build this dream bridge.


All was going well until a tragic accident happened just after few months of starting the project. This accident took life of John and Washington was paralyzed.

After the incident experts started to criticize them and say, “We told them so, It’s foolish to chase this vision.” Everyone made negative comments and felt that project should be scrapped because only John knew how to build this bridge.

Even after so much negative comments, Handicapped Washington was not discourage and still had desire to complete the bridge He tried to inspire his friends and crew but everyone was scared after the incident.

One day, as he was laying on his bed, He felt like the light coming from the window is like message for him, “Not to Give Up”. This gave him an idea. As he could only move his finger, he decided to make best use of it.

For 13 years Washington tapped out his instructions with his finger on his wife’s arm, until the bridge was finally completed.

Moral:
Dreams that seem Impossible can be realized with Determination and Persistence, No matter what the Odds are.