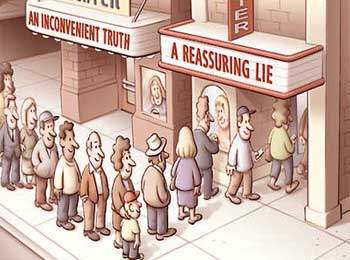 Once evil spirits complained to God, “Why are they treated so badly, good spirits live in such a magnificent palace and we are all in ruins, why is this discrimination?”

God explained to them, “I made everyone equal but you have become evil spirits by your actions.”

But even after God’s persuasion, evil spirits kept complaining about being discriminated against.

So, God thought for sometime and called all the good and evil spirits and said, “I have taken a decision on request of the evil spirits, from today all the palaces or ruins that had been given to you to stay will be destroyed. Now, Good and evil spirits will be able to build two separate cities for themselves.”


Then a soul said, “But for this, where do we get bricks from?”

Evil spirits thought, more people lie on earth and so if they took bricks made by lies then a huge city could be built. So they asked God that they would be using bricks made of lies, on other hand good spirits got bricks made by truth.

Construction of both cities began simultaneously, with in a few days city of evil spirits city began to take huge form and they were constantly getting piles of bricks and were able to built a magnificent city from it.

While construction of city for good spirits was going slow, even after many days they were able to built only a small part.

A few more days passed like this, evil spirits were enjoying their stay at their new home in newly built city then one day suddenly a strange incident happened, bricks began to disappear from city of evil. Bricks started disappearing from the walls, from the roofs, from the foundations of the buildings, from everywhere and soon their city started taking the form of ruins.

Troubled evil spirits immediately ran to the God and asked, “Why have these bricks suddenly started disappearing from our homes, our city has become a ruin again.”

God smiled and said, “Bricks started disappearing!! Well, it seems that the lies of those who lied were caught and that’s why the bricks made by their lies also disappeared.”

Learning:
We have been Hearing since childhood: the Life of a Lie is Short, If not Today or Tomorrow, a Lie is Caught. It seems Easy to achieve Success by following the Path of Lies and Dishonesty but in the End it makes us a Failure.

Those who Follow the Same Truth move Slowly but their Success is Permanent. Therefore, we should always Build our Success building on the Basis of Truth, only Ruins can be Built on the Basis of Lies and Dishonesty..!!

You May Also Like: Half Truth – Captain and Sailor Story

Search Keywords: Bricks Made of Lie or Truth – Which Will You Take? Short Story with Important Life Lesson, Bitter Truth of Life, Must Read Stories for Adults, Story to Share with Family and Friends, Interesting Short Story about Truth and Lies