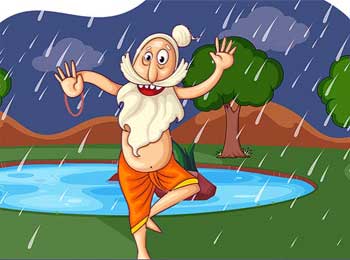 Once, there was a drought in a village. The crops were drying up due to lack of rain. The villagers were worried and sad. They felt that the entire crop would be ruined.

Then one day a Monk came to the village and started dancing with enthusiasm. Anyone who saw him in the village would have considered him insane. Slowly the news of that mad Monk spread in the whole village. People gathered around him to see him and many started making fun of him.

Then suddenly the clouds started rolling in and it started raining heavily.

The Monk stopped dancing. The surprise of the villagers knew no bounds. With folded hands they started asking for forgiveness from the Monk.


From that day on wards, that Monk started living in the village itself. Whenever it was dry, he would dance and it would rain. He became famous by the name of Monk of Rain.

Once some boys from the city came to visit the village. They heard about Monk and could not believe it.

They told the villagers that if it can rain due to the dancing of Monk, then it can also happen because to our dancing. Boys took up the challenge of making it rain by dancing.

The next day all the villagers gathered in a field. The Monk was also there and the four boys were also there. The four boys started dancing. An hour passed but it did not rain.

A boy got tired of dancing and sat down. An hour passed but it did not rain. The other boy also sat down tired. The two boys kept on dancing but seeing no rain, they too sat down tired after some time.

It was evening and monk was still dancing, Monk danced and danced. The four boys started thinking that this monk is dancing in vain.

Then suddenly it started raining. The Monk stopped dancing and the villagers jumped with joy.

The four boys fell at the feet of the monk and started asking, “Baba! How did you do this miracle?”

The monk said, “I start dancing with the belief that it will rain and keep on dancing till it rains. That’s why whenever I dance, it rains.”

Learning:
To be Successful in any Work, Start the work with Determination to Complete it. There will be ups and downs but don’t be deterred by it. Keep working Hard, you will Definitely get Success in work.

You May Also Like: Sinful Man Deeds – Story about Judging Others

Search Keywords: Boys Challenge to Monk – Story about Belief, Motivational Stories for Kids, Story to Motivate One to Work Hard, Monk of Rain Short Story for Children to Learn about Importance of Believing to the Core, Monk Belief and It’s Result Story, Deep Meaning Story about Belief and Working Hard Until You Achieve Success, Story to Share, Short Stories in English to Learn Life Lessons