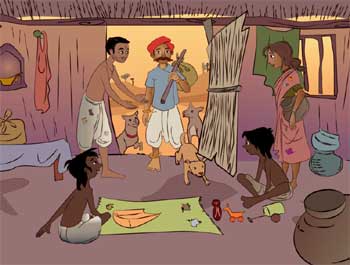 Long ago, in a village, a boy was born in rich family. His name was Deva. From his childhood, He was very Kind and would share his riches with needy.

Time went by and he got married and had sons. With no thoughts for future, both Deva and his wife continued to share with needy. No one ever went away from their home empty-handed.

Ultimately, with time Deva ran out of money and He didn’t even had enough to feed his family. Sometimes, He and his family had to go without food for days.

One day, Deva managed to get some rice, wheat, sugar and ghee. In evening when they cooked food and sat down to eat, whole family thanked God for giving them food.


Just then, a holy man knocked at their door.

Deva received guest by bowing and welcomed him in his home and served him food. Holy man went satisfied.

Half of food was still left for Deva and his family. All of them again sat down to eat.

Just them a hungry farmer came looking for food.

Deva welcomed him as well and offered him a seat and served him food. Farmer enjoyed meal and then thanking him left.

There was still some food left for family. Family decided to share whatever they had remaining food with them and again sat down to eat.

Just then a traveler appeared at Deva’s door and begged for food for himself and his dogs.

Deva welcomed him and whatever was left, Deva offered it to guest. Traveler and his dog were happy to have food. Deva was happy to see hungry dogs cleaning up their vessels.

When traveler left, there was no food left for family.

Still, Deva smiled and said, “God is kind. We have some water left.”

Just then, he heard someone crying and saying, “I am dying of thirst. Will a kind soul give me some water?”

Deva quickly took that water out to street and gave to that poor man. Man gulped water down. Deva was happy to help.

As he was leaving to go back to his house, poor man revealed himself as God, Lord of Creation.

He said to Deva, “Deva, Gods came down on earth to test you and we all are pleased with your spirit of sacrifice. We will be happy to grant you any boon you ask for.”

Deva bowed to God and said, “May i always be able to share whatever i have with me with my fellow men.”

God blessed Deva and restored his wealth. From that day, Deva and his family never went hungry and continued to help those in need.