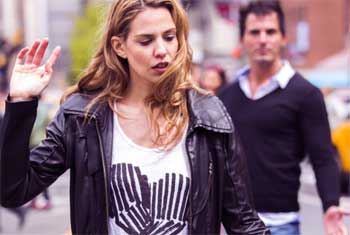 A boy and girl loved each other very much. One day boy proposed girl.

Girl asked, “What am I to you?”
Boy thought for a moment  and then looked into her eyes and said, “You are missing part of my heart.”

Girl smiled and accepted his proposal. Soon they both got married and lived a happy life for a while. With time young couple began to drift apart because of their busy schedule. Due to daily worries and work their life became difficult.

With each passing day couple started to have quarrels and with this their relation got affected badly with time it became worse.


One day after fight girl ran out of the house and shouted to her husband, “You don’t love me.”
Boy hated her silliness and out of impulse said, “May it was a mistake. You were never the missing part of my life!!”

Suddenly girl turned quiet and she knew spoken words can’t be taken back. With tears in her eyes she went home, pack her things and before leaving him left a note for him.

Note said, “May be I was never missing part of your life, let me go and search for some who is…. Lets go our separate ways. This way it would be less painful.”

Boy never married again but he used to keep information about girl somehow. He knew that she had left country and was living her dreams. He used to regret about what happened but never went to girl and tried to patch up. He never wanted to accept the fact that he missed her and still missing her in his life.

One day at the airport while he was going away on business trip he saw her. She was standing alone just few steps away. She saw him and smiled at him gently.

Girl smiled and waved goodbye to him.

Same evening boy heard of plane crash. Same plane on which girl went. Boy tried to found about her and he got to know that she was dead. Once again like before he felt pain of missing her. he finally knew that she was the missing part that he had broken carelessly and now she was gone forever.

Moral:
Sometimes people say things out of anger but we should not act in impulse and try to think wisely and give time because a moment of anger could result in lifetime of punishment.

2 thoughts on “Boy and Girl After Marriage”