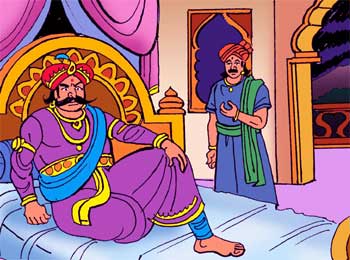 Once a King needed a servant. next day, his minister presented a person who would be worthy to work for King.

That man started to work as personal attendant of King. One day, King said to minister, “Although this man is good at his work but his appearance is not good.”

It was summer season, King asked his servant to bring him water. Minister was also present there and saw this. When servant went out to bring water, minister also went with him. When servant came back he brought water in golden vessel.


When King drank water, he felt a little hot to drink it. King immediately threw that water away and said, “Such hot water.. that too in this hot weather.”

After this, minister said, “Your majesty, previously he bought water in gold vessel which is beautiful, valuable and good but it lacks quality of imparting coolness to water. But this time, servant bought water in an earthenware which is simple but it has ability to cool.

Therefore, we should look at the virtues of person not just care about his appearance only.”

King realized that what minister meant and from that day the attitude of the King changed.

Learning:
A Person Biggest Quality is his Character.

Many people look beautiful on the outside but are ugly on the inside. While there are people who are not beautiful from outside but the purity of their feelings is so much inside them that their personality becomes magnetic. There is a huge difference between being beautiful and looking beautiful.

A Man becomes perfect by Virtues and not by his looks. Indelible beauty emerges from the purity of the mind because beauty is not merely a presentation of one’s look but it is the mirror of one’s mind, thoughts and deeds.

You May Also Like: Three Toys and Their Value – King and Toy Seller Story