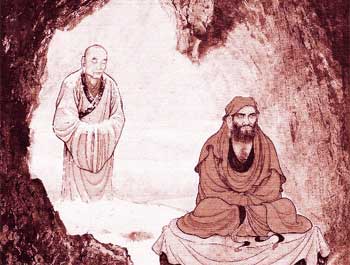 Once Bodhidharma decided to visit China. His fame had reached before him. Chinese Emperor himself came to receive Bodhidharma.

Emperor had come from far away, from his capital in center to border of China, to receive Bodhidharma.

Bodhidharma when reached, he was carrying one shoe on his head and one was on his foot, this shocked Emperor.

Emperor was very sophisticated man, he had a court of very cultured people. Emperor couldn’t say anything about it but still he avoided seeing shoe sitting on Bodhidharma head.


Emperor was a very religious person. He was the one under whose supervision thousands of Buddha’s status were built in china. Hundreds of scholars were bought to China for translation of Buddhist script.

Monks used to praise him saying, “You have accumulated too much virtue. You are going to be immensely rewarded in other worlds.”

So, meeting Bodhidharma Emperor first question was, “I have done all these things. What is going to be my reward?”

Bodhidharma replied in loud voice, “You idiot..! You will fall directly into hell. You are asking for reward? The very idea of reward is of greed. They very idea of achieving something for things you have done, is not a reflection of your wisdom.”

Emperor was shocked, everyone around was shocked. Emperor didn’t like it and thought that may be he is not right man to bring into country.

Still ignoring the insulting language of Bodhidharma, he said, “Your Holiness..”

And before he could complete his sentence, Bodhidharma interrupted and said, “There is nothing Holy, nothing Unholy. All is empty, just pure nothingness. These are just divisions of mind, sacred and profane, holy and unholy, saint and sinner. These do no exist as you enter into deeper meditation.

So don’t call me – Your holiness. I have left behind that kind of childish language. Be straightforward.”

Emperor said, “My mind continuously remains clustered with thoughts. I have been reading Buddhist scripture and they all say that – Unless you are Thoughtless and yet Perfectly Aware, you will Not find Truth.”

Just come alone and i will put all your thoughts aside from your mind. I will bring silence to your mind.”

Emperor was much afraid. He couldn’t sleep at night. Whole night he was thinking whether to go or not to go, alone because to him Bodhidharma seemed insane man.

But by the time of going, Emperor thought, “Whatever he said, however he behaved. Yet he has a tremendous presence and great magnetic pull. I will risk it. I will go alone.”

In morning, Emperor reached temple where Bodhidharma was waiting for him.

Bodhidharma said, “It is a very simple matter. You just sit here and I am sitting in front of you. You see my staff – if I feel that some thought is stubborn and is not leaving you, I will hit your head. Your work is only to watch your thoughts without any judgment. Just be a witness.”

Emperor thought to himself, “Perhaps i have taken a wrong step. This man can hit me any moment because my mind is full of thoughts. But since i have come here, I will try what he said.”

He sat before Bodhidharma, just watching his thoughts.

(Watching thoughts implies no Judgement, no Appreciation, no Identification. Just watch as you watch the crowd passing on road or as you Watch clouds moving in sky. Your mind is only a screen, you simply watch.)

He shook emperor and asked him, “Is there any thought anymore?”

Emperor fell at his feet and said, “You certainly did it. I pray you, don’t leave China. All those scholars and monks are simple parrots. They go on talking about witnessing and watching but you have given me the experience.

Without teaching me about witnessing, you have simply made me witness. I don’t need anything anymore.”

oughtless, You Find your Ultimate Eternal being, that is your Purest Consciousness.

You May Also Like: One’s Nature and Enlightenment..! (Buddha Stories)