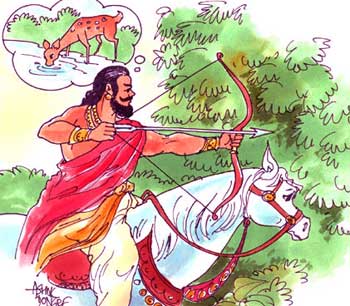 Very long ago, a one-eyed king was ruling a country. He was fond of arts and crafts. He generously rewards the great artists, poets and craftsmen. However, he was stuck with one major habit. He never liked any person who used to praise him falsely! Simply, he was a man of truth and wanted his people to be true.

The king was born with one eye. He had vision on his right eye and the space for left eye was simply closed with the skin! One day, he wanted to get himself painted and made an announcement. After filtering the talented artists, the king asked three men to draw his face.

He told them, ‘If you do an impeccable job, I will reward you with something you won’t even earn in your life time! If not, you will be severely punished!’

All the three agreed and started to sketch his face.


The first artist showed the painted picture of the king. The king felt bad as the picture showed that one of the eyes was shown blind, though he drawn both eyes. The artist was sentenced to imprisonment for 10 years.  The king felt that the picture was a dishonor to a ruler showing a physical disability!

The second artist showed the picture and even he was imprisoned for 5 years. The picture depicted the king having vision in both eyes. The king felt he was falsely praising the king to earn reward and it was also considered a matter of dishonoring the king pointing his blindness!

Moral:
There is Solution to Every Problem.. You Just Need to Think Hard