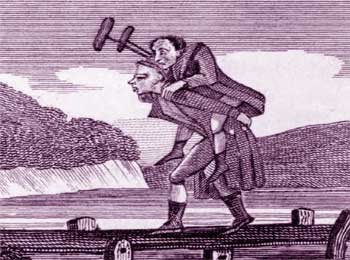 Once in a forest, near a city, lived two beggars. There were in same profession but there were not many alms they could get and because of that they became enemies.

One was blind and other was lame. They were always quarreling about territories.

Because there were two of them, there was great struggle and competition for them. They were enemies for years.

One day, forest caught fire. Blind man was able to walk and run but it was still dangerous for him to walk away from forest because he couldn’t see whether he was going in right direction. He had no way to know if he was walking toward fire or away from fire.

Soon, he saw blind beggar passing by. He stopped him and asked to walk together as it will be easier for them to save themselves from fire. Blind man understood.

Both of them forgot all their antagonism and fights as they knew that it was not time to fight but unite.

Just then blind man took upon his shoulder lame man and they became one. Now blind man had eyes and lame had legs.

Lame man could see and he started to direct blind man where they had to run and fast and which directions had to be avoided.

Blind man was strong enough to run while carrying lame man on his shoulder. In end they both were able to come out of forest without being injured.

Moral:
We all can Achieve our Goals by Helping One Another in times of Need.