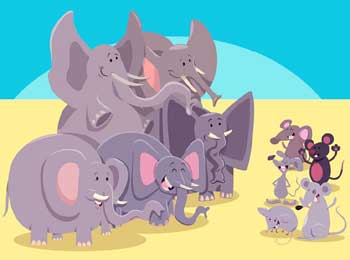 Long ago, a city turned into ruins and its resident moved to far away towns. So mice decided to stay in that city as there was enough supply of food for mice.

Slowly, mice grew in numbers and entire city was turned into city of mice.

Far away from city was a very dense forest and a hugh river that passed through forest, supplying clean water to animals staying in jungle.

During one summer, river ran dry and animals in forest started to dry of thirst. King of elephant herd asked all young elephants to go in search of another source of water.


After few days, one elephant came back and informed King of elephant about lake near city of mice.

King of Elephant at once ordered herd to leave the forest and move toward lake. As soon as elephants saw lake, they rushed toward it. In their excitement, they didn’t notice that hundred of mice were getting trampled under their feet.

Mice tried to save themselves but still many were killed and injured. Once herd passed by, mice feared that on their way back from lake, elephant would unknowingly trample many more.

So, an old mouse suggested that they should go to King of elephant and asked them to take other route to return to forest.

Old muse went to Elephant king and said, “O elephant, as you travel through village, many mice are trampled. We will be very grateful if you could please consider changing your route. We will remember this favor and would return favor when you are in need.”

Elephant king laughed and said, “How can you return favor. Nevertheless, we honor you request and change our route.”

One day, King of near by kingdom was raising an army and wanted lost of elephants for his regiment. His servants went to forest and laid traps for catching elephants.

Elephants got trapped, servants tied up them to trees with help of thick ropes and went back to inform king.

King elephant was among those who got trapped. He started thinking of way to escape and remembered about old mouse promise.

He called one of young elephants who had not fallen into trap and was still free. He asked him to go to city of mice and narrate entire incident and ask for help.

Young elephant did same. Soon, thousands of mice came running to help their friends in hour of need. Within minutes, they cut loose ropes and elephants were free again.

Elephant king thanked old mouse for remembering promise and rescuing them from their captors. Old mouse was happy that mice were able to help elephants and thus repay the debt.

Moral:
Always be Kind to people because you Never know, When and how one can be of Help to You in Your time of Need.