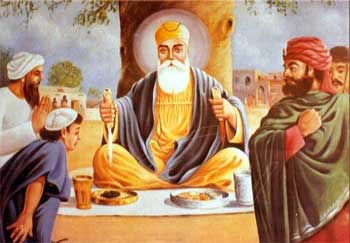 Guru Nanak Dev JI used to travel to a number of places. Once he was on his way to Saidpur, before he could arrive there, word spread in whole city that a holy man is going to visit.

Malik Bhago who was chief of town at that time was a corrupt person and earned a lot of wealth through unfair means. He used to charge extra tax on poor farmers and would take most of their crop, leaving them hungry.

When he came to know about Guru ji’s visit. He started preparing for Guru Ji’s stay at his house.

When Guru Ji reached Saidpur, he went to house of a poor carpenter name Lalo. Lalo couldn’t afford to serve many dishes, so he would serve Guru Ji with little food he can afford and Guru Ji would eat that simple food with love.


Guru Ji chose to stay at Lalo’s for sometime as guest. When Malik came to know about it, he held a big gathering and invited Guru Ji and many other holy men to attend it.

Guru Ji declined his invitation. Malik became very angry and ordered his guards to go to Lalo’s place and escort Guru Ji and bring him to his home.

When guards came to Lalo’s place and asked Guru Ji to come with them, Guru Ji decided to visit Malik’s place.

When Guru Ji reached Malik’s place. He welcomed him and said, “Guru ji, I had made so much preparation for your stay. I have made so many dishes for you and yet you decided to stay at poor carpenter house and eating his dry bread?? Why?”

Guru Ji replied, “I cannot eat your food because your bread is ill-begotten and has been made with money sucked from the poor through unfair means while Lalo’s bread is made from the hard-earned money.”

Malik Bhago got mad after hearing Guru Ji’s remark and asked him to prove his point.

Seeing this Malik was completely shaken. He realized his mistakes and felt guilty. He asked for forgiveness for his sins.

Guru Ji asked him to distribute his ill-gotten wealth among the poor and henceforth live an honest life. Malik did as asked and lived rest of his life honestly.