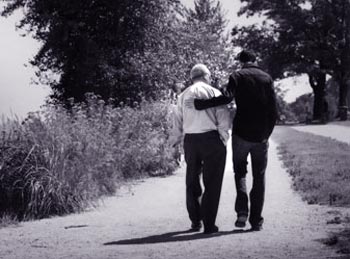 One evening, a son took his father to a restaurant. After getting seated there. Son called waiter and ordered food.

Father was old and weak because of this while eating food, his father dropped food on his short and trousers.

While son was calming having food with father, other diners sitting there looked at them with disgust. Every one sitting there were watching them with disgust, as father was not able to eat properly and dropping food. Even when all the diners were staring at them still son didn’t seem to be embarrassed by all this.

After they finished eating, son quietly took his father to wash room, wiped the food dropped on his shirt and trousers, combed his hairs and fitted his spectacles firmly.


When they came out of washroom, all diners sitting there watched them in dead silence and were not able to grasp how someone could embarrass themselves publicly like that..!!

Son payed bill and started to walk out of restaurant with his father.

At that time, one of the old man among-st diners called out to young man and said, “Don’t you think you have left behind something??”

Old ma retorted, “Yes you have…!! You have left a lesson for every son and hope for every father..”

Moral:
When we are small and did silly things in public, our parents never feel embarrass about it then why don’t children take their old parents out in public and spend time with them without feeling embarrassed??