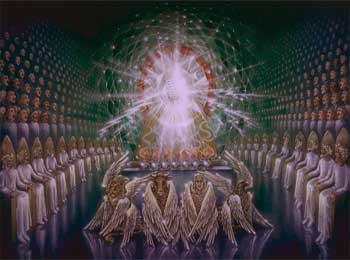 Once there was demon named Sauhaat, demon who had hundred hands. He was so powerful that no King in world could fight him.

One by one he defeated every King in world and then dashed towards heaven to challenge God.

Sauhaat went to God’s court and proudly said, “I am most powerful being in this entire universe. I have defeated everyone in this universe and now i have come to defeat you..

If you don’t want to fight me then step down from throne and declare me new God..”


God smiled and stepped down from his throne.

After a while God invited all demigods in coronation for Sauhaat. Everyone there was terrified of this decision.

Demigod talked among themselves, “How could God do that? Doesn’t he know the amount of destruction that will take place if Sauhaat becomes God..”

Despite all these. Sauhaat’s coronation was completed and He sat on throne.

As soon as he sat, he began hearing various unfamiliar voices to which he had no clue. The voices were actually wishes and demands that creatures from all across the universe expected God to fulfill.

Sauhaat couldn’t bear the burden for more than a minute and his brain exploded leading to his death.

The demigods praised God for his cleverness and all of thanked him for saving all.

Moral:
Being Mentally Strong is far more Important that Being Physically Strong.

You May Also Like: Sage’s Advice and Hermit’s Power..!