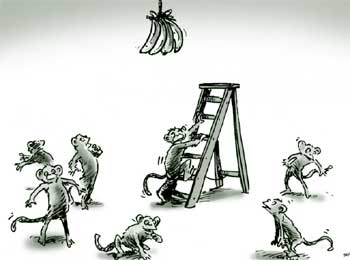 Once a experiment was done which started with a cage. Inside cage, a banana was hung on string and a set of stairs was placed under it.

Soon, five monkeys were bought and were entered into cage and locked.

Before long, seeing banana, a monkey started to go to stairs, to climb and take the banana but as soon as he touched stairs, experimenter sprayed other monkeys with cold water.

After a little while, another monkey made an attempt to get banana but again as soon as he touched stairs, other monkeys were sprayed with cold water.


This happened some more times and pretty soon, when another monkey tried to climb stairs, other monkeys tried to stop him.

Next, he removed one monkey from cage and replaced it with new one. As soon as new monkey saw banana, he went toward stairs to climb up to reach banana.

But to his surprise and horror, as soon as he tried to get toward stairs, all other monkeys attacked him.

After a little while, new monkey again made a attempt to get banana but again he got attacked. Now, he knew that if he tries to climb stairs, he will be assaulted.

Now, experimenter, removed another of original five monkey and replaced it with a new one.

Same thing happened again, as soon as new monkey went near stairs, he got attacked by other. Even previous newcomer took part in attacking new monkey with enthusiasm.

New one tried to make attempt to get banana and was attacked. This time other two newcomers also took part in attack but they had no idea why they were not permitted ti climb stairs or why were they participating in beating of newest monkey.

After this, fourth and fifth original monkey, who were sprayed with cold water, were also got replaced.

What was left was group of five monkeys that never received a cold shower but still they continued to beat up any monkey who attempted to climb stairs.

But now, no monkey ever again was able to approach stairs to get to banana.

Now, what is reason? Why not?

It’s because as far as those monkey knew, that’s way it always had been around there but now no one knew why.

That’s how things go on in Life.

When we follow or reject any traditional rule, then we should understand that whatever our ancestors did had their reasons for following that.

We should not blindly follow or reject any ancestral tradition. We should try to understand reason for things done, way they are.