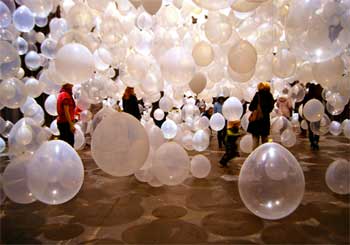 A group of employees was working in a software company. It was a team of 30 employees. This was a young, energetic and dynamic team with keen enthusiasm and desire to learn and grow. The management decided to teach the employees about finding real solution to the problems.

The team was called to play a game in a banquet hall. The group was quite surprised as they were called for playing game. All reached the venue holding various thoughts. As they entered the hall, they found the hall decorated beautifully with colorful decorative papers and balloons all over the place. It was more like a kid’s play area, than a corporate meeting hall.

Everyone was surprised and gazed at each other. Also, there was a huge box of balloons placed at the center of the hall.

The team leader asked everyone to pick a balloon from the box and asked them to blow it. Every one happily picked a balloon and blew it.

The team leader announced the employees to go to the room and pick the same balloon that had his name on it. Also, he told them that no balloon should blow up and warned them to be very careful!

The team was told that the second level of the game was over.

Now it is the third and final level. They asked the employees to pick any balloon in the room and give it to the person named on the balloon. Within a couple of minutes all balloons reached the hands of the respective employee and everyone reached the hall.

Moral:
Many times, sharing and helping others give you real solutions to all problems. Help out each other to ease things.