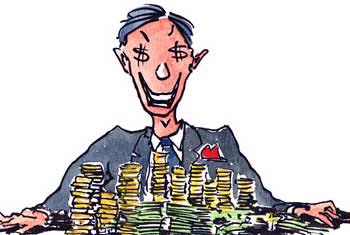 Once in a village lived a very greedy man Paul. He always wanted to have lots of money and wish to own everything to himself. He used to calculate each and every small ways in which he can save and get more money.

He used to deceive others and many time told lies to protect his wealth. He was considered just opposite of Honesty. However one day he was taught good lesson because of his own act of greediness.

One day he missed a small bag of coins which contained 50 coins. He searched for it but couldn’t find it. He told his friends and neighbors and workers about his lost bag and requested them to inform him if they found it.

After couples of days, a little girl who used to live near Paul’s house found that bag. She told her father about it. Her father used to work in Paul’s land. He told his daughter that it was his master’s bag of coin and would return it to his master.


Despite being poor worker went to his master and returned the bag. Paul was happy to get that bag and because of his greediness decided to play a trick.

He shouted at his worker, “There were 75 gold coins in this bag but you gave me only 50 coins. Where are other coins? You have stolen them.!!”

Worker was shocked to hear that and pleaded to his master that he gave whatever her daughter found. But selfish and greedy Paul didn’t accept it and decided to take the matter to the court.

All went to court. Judge heard both sides and examined daughter and worker about number to coins they found and assured it was only 50.

Now judge cross examined Paul about coins to which he replied, “Yes lord, I had 75 coins in my bag but they gave me only 50. They have stolen my coins.”

Now, Judge made the judgement, “Since Paul lost a bag of 75 gold coins and bag found by girl had only 50 coins. So it doesn’t belong to Paul. So it was lost by someone else. In addition, if someone found any bag of 75 coins it would belong to Paul. There is no claims against lost of 50 coins. So i order girl and his father to accept 50 coins as token of appreciation for their honesty.”

Moral:
Honesty is Rewarded and Greediness is Punished. We should not be greedy and cheat others.

Keywords: Bag of Coins – Greed Stories for Kids with Moral Short Stories English, We should Not be Greedy Stories for Children

One thought on “Bag of Coins!!”