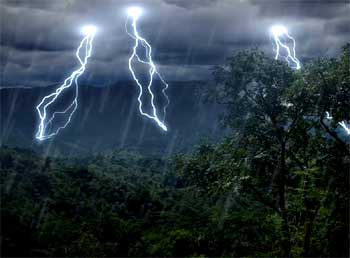 A man who was an atheist (Atheist is someone who doesn’t believe in God) went for trekking. On his way he got lost deep in the dense forest. Man was trying to look for his way out from that forest and after walking a while he saw that there was a bear with his cubs at a distance from him.

Bear was very large. Bear and its cubs seemed to be very hungry at that time. Bear started to move toward that man, man got terrified. He screamed in terror and started to run away from bear. He tried his best to ran away from bear but eventually he got exhausted and sank to his knees. Shakily man was just sitting there in fear.

Bear, seeing his prey, moved slowly towards the petrified man. Man eyes were filled with tears.

Being an Atheist man couldn’t think about anything and utter words he never thought he would say ever all his life, “God Please Help me..!!”


Just when man said these words, a flash of lightning appeared up in sky. Clouds parted away and forest fell silent. Everything around that man froze still and even bear froze still in a trance. Atheist stood there seeing all this.

A loud voice came from above and said, “You are an atheist and you seriously made me mad. You denied me all your life and now when you lost just because you couldn’t follow your stupid map properly. Now when you are about to be eaten by hungry bear, suddenly you are on your knees and begging for my help…? Is this a joke?”

Atheist looked down and realized that he is in no position to argue. So he said, “I understand your point. It’s bit late for me to convert.”

He thought to himself, “What if God turns bear into a Believer and then it will not harm him.” and said to God, ” But what about bear?? May be you could convert bear instead..!!”

“Hmm.. interesting.. It shall be done..”, God replied. At an instant the white light vanished and every thing went back to normal.

After a while bear awoke and shook its head and had completely different expression on its face, It was looking calm and at peace. Man felt relieved.

After a while he saw that bear closed its eyes and bowed its head to God and said, “Thank u my Lord, for what we are about to receive. Thank you for the food you gave. Amen.”

Moral:
Always think.. What you Ask for.. Because it’s not necessary that things will go way you think it will happen..