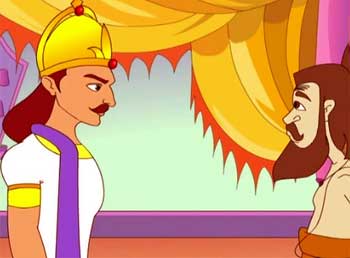 Once there was a kingdom which was ruled by a tyrant king. He was so arrogant that he couldn’t stand praise of anyone else except for himself.

One time in his kingdom came a Sage. Sage admiration was spread through kingdom with in few days. He was kind and wise. He helped people by giving wise answers for their queries.

Soon this news of Sage reached king through his loyal ministers. King envied him and decided to defame him among people.

So, king thought of a plan. King sent his guards to invite Sage to his palace. Sage accepted his invite. Public announcements were made for the day.


On decided day Sage came with smiling face. King welcomed priest. King told priest that he heard about his wisdom and wanted to see it for himself.

King said, “I will ask you question..”

King was holding a dark cloth bag in his hand. He questioned, “Tell me what is in my hand??”

Sage replied, “You are holding a bird inside that bag..”

King was little surprised yet calmly replied, “Yes.. you are right.. Now tell me is it alive or dead??”

“If you are a wise man you will be able to answer..”, commented king.

King thought that whatever he answer it’s a win win situation for him.

Moral:
Similarly, Path we give to our Life is in our own hands. By our Choices and Efforts we can decide what to Make of Our Life..