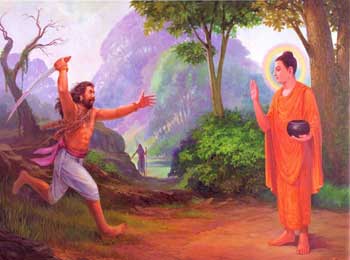 Long ago, there was man who was a mad murderer. He had taken vow that he would kill one thousand people.

Because society hadn’t treated him well, He had decided to take revenge on society by killing one thousand man and from every person killed he would take one finger and make a rosary around his neck.

Because of this his name became Angulimala (Man with rosary of fingers).

Everyone was afraid of Angulimala, even Kings, generals were afraid of him. Nobody would move in those parts, wherever people came to know that Angulimala lived. It became very difficult for him to find one man to kill and complete his vow.


One day, Buddha was staying at village near forest. Day he left from village, villagers said, “Don’t go that way. There lives a mad murderer. He has already killed nine hundred and ninety nine people.

He doesn’t think twice before killing. He will not think that you are Buddha. There is another way, you take that path.”

Buddha said, “If i don’t go then who will go? He is waiting for one more, so i have to go. He is a man, he needs me. I must take the risk. Either he will kill me or i will kill him.”

Saying this Buddha left. Disciples who had said that they would remain with Buddha till very end, were scared and as they move toward forest, even disciples started to lag behind because of danger.

When Buddha reached hill, he was all alone. Angulimala was sitting on rock, he saw Buddha and thought, “This man seems to be absolutely unaware that I am here, otherwise nobody goes along this path.”

Buddha looked so innocent, so beautiful that even Angulimala felt compassion and thought, “It is not good to kill this man. I will leave him, i can find somebody else to complete my vow.”

Then he said to Buddha, “Go Back! Stop right there. Don’t step forward. I am Angulimala. I have killed nine hundred ninety nine people and i need just one more finger. – even if my mother come i will kill her to complete my vow.

So, don’t come near me. You may look like a monk but i don’t believe in any religion. I don’t care if you are great saint. All i care about is killing one more person. So don’t step forward, otherwise i will kill you.”

Angulimala thought may be this man is deaf or mad. So he shouted again, “Stop! Don’t move another step.”

Then Buddha said, “I stopped long ago; I am not moving, Angulimala, you are moving. All movement has stopped because all motivation has stopped. When there is no motivation, how can movement happen?

There is no goal for me, I have achieved the goal so why should I move? You are moving and I say to you: You Stop!”

Angulimala was still sitting on rock, he started laughing and said, “You are really mad. I am sitting and you say to me that i am moving. You are moving and still you say that you have stopped.”

Buddha came near him and said, “I have heard that you need one more finger. As far as this body is concerned, my goal is achieved, this body is useless. When I die people will burn it, it will be of no use to anyone.

You can use it, your vow can be fulfilled: cut off my finger and cut off my head. I have come on purpose because this is the last chance for my body to be used in some way, otherwise people will burn it.”

Angulimala said, “What are you saying? I thought that I was the only madman around here. Don’t try to be clever because I am dangerous, I can still kill you!”

Buddha said, “Before you kill me, do one thing, just the wish of a dying man: cut off a branch of this tree.”

Angulimala hit his sword against the tree and a big branch fell down.

Buddha said, “Just one thing more: join it again to the tree!”

Angulimala said, “Now I know perfectly that you are mad – I can cut but I cannot join.”

Buddha started laughing and said, “When you can only destroy and cannot create, you should not destroy because destruction can be done by children, there is no bravery in it.

This branch can be cut by a child but to join it a master is needed.

And if you cannot even join back a branch to the tree, how can you cut off human heads? Have you ever thought about it?”

Angulimala closed his eyes and fell down at Buddha’s feet and said, “You lead me on that path.”

And it is said that in single moment he became enlightened.

Next day, he was a bhikkhu, a beggar. He went around in city, begging. People closed their doors and were afraid that even if he has become a beggar he can not be believed.”

When Angulimala begged there was nobody to give him food. People were on their terraces looking down and started throwing stones at him because he had killed many men of that village. Almost every family had been victim.

People were throwing stones at him. Angulimala fell down on street, blood was flowing from all over his body, he had many wounds.

At that time, Buddha came to him and said, “Look! Angulimala, how are you feeling?”

Angulimala opened his eyes and said, “I am so grateful to you. They can kill the body but they cannot touch me and that is what I was doing my whole life and never realized the fact.”

Buddha said, “Angulimala has become enlightened, he has become a Brahmin, a knower of Brahma.”