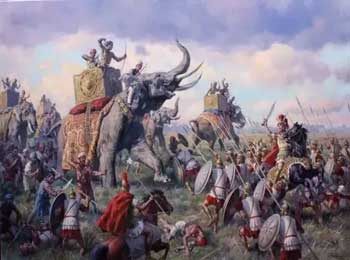 Before Alexander came to India, his teacher Aristotle had asked him, “Bring a sannyasin when you come back. I would like to see what a sannyasin is like, what it is all about because that is greatest contribution of India to the world.”

After invading India, When he was going back he remembered. He inquired where to find a sannyasin.

People said, “Sannyasin are many but real are very few. We know one.”

When Alexander went to see sannyasin, As he entered into energy field of that sannyasin, he was tremendously affected, he saw same beauty as Diogenes, same peace, he remembered Diogenes immediately.


He said to sannyasin, “I have come to invite you – come with me. You will be out royal guest, every comfort will be provided for.

Sannyasin said, “I have dropped all coming and going.”

He said, “This is commandment.. I command you.. You have to follow. This is order from the great Alexander.”

Sannyasin laughed and said, “Nobody can command me, not even death.”

Alexander got angry and pulled out his sword and said, “You don’t understand. I am a very dangerous man. Either you will come with me or i will cut off your head.”

Alexander was surprised to his answer and said, “How will you see it? You will be dead!”

Sannyasin said, “That is the point: I cannot die anymore, I have become a witness. I will witness my death as much as you will witness. It will happen between us two – you will be seeing, I will be seeing. And my purpose in the body is fulfilled: I have attained. There is no need for the body to exist anymore. Cut off the head!”

Alexander had to put his sword back in the sheath as he realized that he cannot kill such man.