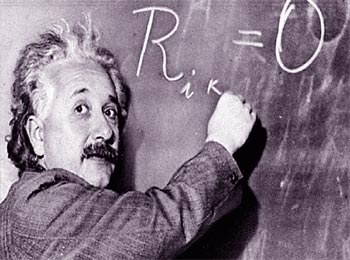 When Einstein’s “Theory of Relativity” became famous, he was invited to give presentation of his theory. Einstein used to go by car and everywhere he was accompanied by his driver. During Einstein’s presentation his driver used to sit in last row.

One day while going for presentation in his car, his driver said, “Sir, your ‘Theory of Relativity’ is so simple that even i can give presentation on it.. I have heard it so many time that i remember every word that you say to present your theory.”

Instead of getting annoyed, Einstein took it as compliment as he was happy to know that even his driver was able to understood his theory even when he has no knowledge about science.

During those day media was not booming industry and people didn’t really know how Einstein look. So when Einstein’s said to his driver, “For next presentation i would like you to present theory..”


His driver agreed. When they reached at location of presentation. They changed their clothes. Driver dressed as professional scientist and Einstein himself dressed as driver went inside hall.

Finally driver went on to stage and started to give presentation. He presented “Theory of Relativity” so well that no one could doubt him.

After presentation was finished there was question answer round. Most of question were same as in previous presentations so driver easily managed to answer those.

Almost question answer round was finished but just in the end one person from the audience asked a question, driver didn’t knew what to answer as no such question was asked in previous presentations.

Driver didn’t knew what to do but yet he knew it wouldn’t be good impression on people if they got to know that Einstein’s driver was giving this presentation.

So he thought for while and said, “Your question is so easy that even my driver can answer it.. he is sitting in the last row.. you can clarify it with him..”

Einstein was amazed at his response and answered that question and presentation was finished without any problem.

Moral:
Quick Thinking and Good Presence of Mind can get you Out of Difficult Circumstances.