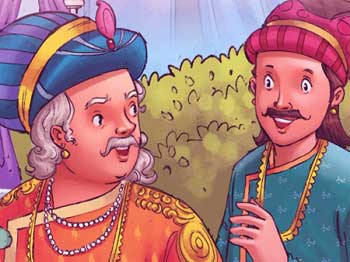 One night, Akbar had a dream that he had lost all his teeth except one. Akbar got greatly disturbed by that strange dream.

Next morning he called his astrologer and asked him about meaning of his dream.

Astrologer replied, “My Lord, This dream was an indication that all his relatives would die one by one before him.”

Akbar became very angry and sad. He asked him to leave his court. Later he asked several other astrologers about meaning of his dream but all replied same.


Akbar became very sad and was distressed by the interpretation. He sent all astrologers back without giving them anything in return for their interpretation.

Birbal listened to him and then thought for a while.

Then he said, “My Lord.. You don’t need to worry. That dream meant that You will longer and more fulfilled life than any of your relatives.”

Akbar cheered up when he heard Birbal’s version and rewarded him handsomely.

Birbal had also conveyed the same thing as the astrologers to the Emperor, but in an intelligent manner.

Moral:
When we say something, How we say it and What words we Chose to pass that Message, Makes Great Difference to it. Always Choose Your Words Wisely.