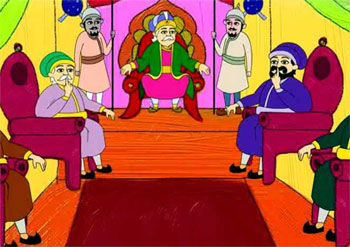 One day in kingdom court Akbar said Birbal to give him answer for three questions. After listening to question Birbal thought for while and then said said that he will answer those next day in court.

When Birbal reached home he was very sad. When his son saw that he asked his father reason for his sadness. Birbal told the whole thing to his son and said that he was not able to answer today but have to answer them in court tomorrow.


Birbal’s son replied before answering this question i request you to order a glass of milk with sugar mixed in it. After milk was bought in court. Birbal’s son asked king to have that milk and tell how does it taste.

Akbar tasted milk and said, “It’s sweet.”
Kid questioned, “Sir, do you see any sugar in this milk??”
Akbar replied, “No because its dissolved.”

Kid said here is answer to your first question, “Like we can’t see dissolved sugar in milk. Similarly God is in everything of this world but we can’t see it.”

Akbar asked second question, “How can we reach God?”

Birbal’s son said, “Your highness! can you see any butter in it?”
Akbar replied, “Butter is there but we can see it once we stir this milk cream.”

Birbal’s son said, “Here is answer to your second question your highness.. Similarly God can be seen on Finding our True Inner Self.”

Now Akbar asked him third question, “What does God do??”

Birbal’s son said, “Your highness, you know that master always sit on higher pedestal and disciple on lower.”

Akbar understood and left his throne for kid and he himself sat down on floor.

Birbal’s son said, “Your highness, this is answer to your last question.”
Akbar was confused and said, “I don’t understand what you want to say..”

Birbal’s son replied, “Your highness.. This is what God do..God can Change any Situation.. In a moment he make King the beggar and Servant the emperor.”