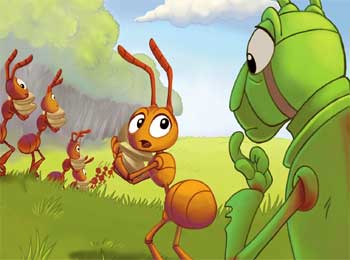 On a summer day, Ant was carrying corn to it’s nest. A grasshopper was hoping near by, chirping and singing to it’s heart content.

Seeing ant, grasshopper said, “Why not come and chat with me instead of toiling in that way?”

Ant replied, “I am helping to lay up food for winter and i recommend you to do same.”


Grasshopper laughed and said, “Why bother about winter? We have plenty of food at present.”

Ant didn’t say anything and went on his way, doing his work.

Grasshopper had nothing to eat and was dying of hunger. He saw that ants were distributing corn every day from stores which they had collected during summer.

Grasshopper went to ant and said, “Please give me some corn from your home. I am hungry and cold and dying. I haven’t eaten anything for days. There is nothing available for me to eat.”

Ant replied, “I told you to work and save food for winter but at that time you refused to work and passed all time playing.”

At that time grasshopper realized his mistake and left.

Moral:
One should Work hard and do not Rely on Others for his Daily needs. 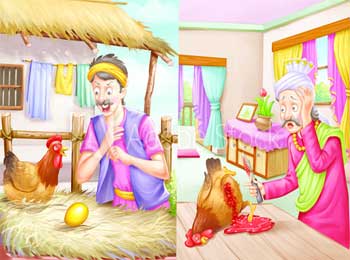 Once upon a time, a farmer had a goose that laid one golden egg daily. This egg would provide with enough money for farmer and his wife to fulfill their day to day needs.

Farmer and his wife were happy for long time.

But one day farmer got an idea and thought, “Why should i take just one egg a day? Why can’t i take all of them at once and make lot of money at once?”

Farmer shared this idea with his wife and she also agreed. So, they decided to cut goose’s stomach for eggs.

As soon as they killed goose and opened it’s stomach there was nothing but guts and blood.

Seeing this farmer realized his foolishness and cried over his lost resource.

Moral:
Think Before you Act.