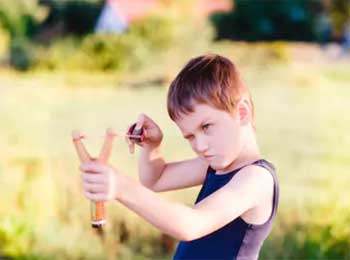 Once there was a little boy name Steve and his elder sister Neena, went to visit their grandparents on their farm.

Steve loved to play with his slingshot. So one day he took his slingshot and went towards wood to practice with it. There he tried many times but could never hit target. It got late and he headed back for dinner.

While walking back, he saw Grandma’s pet duck and just out of impulse, he shot toward it with his slingshot and shockingly it hit duck in the head and killed it.

Steve got scared. He didn’t had courage to tell his Grandma about it and In panic, he hid his Grandma’s dead pet duck in wood pile but his sister Neena saw all. When they returned for dinner, Neena didn’t said anything about duck.


Next day, after lunch Grandma called Neena and asked her to wash dishes. Just then she said, “Grandma, my little brother told me that he wanted to help in the kitchen.”

Steve was surprised to hear this but just then she whispered to Steve, “Remember the duck?”

Steve was scared of revealing truth. So he did the dishes. Later that day, Grandpa asked kids to go fishing with them. Listening to this Grandma said, “Neena can’t go as i want her to stay here with me and help with dinner preparation.”.

Just then Neena said, “Well that’s all right. I will go and My little brother can do all the work because he said he wanted to help.”

Saying this she gestured toward his brother threatening him to reveal truth about duck to grandparents. Steve go scared and again agreed to help with chores that were to be done by his sister. So Neena went wishing and boy stayed to help.

Now whenever Grandma would ask Neena for help, she would just ask Steve to do that work. This went on for days, Steve did all chores for both himself and his sister. Finally he couldn’t stand it any longer.

He came to his Grandma and confessed about duck and told her that he had killed the duck.

Grandma knelt down, gave him a hug and said, “Sweetheart, i know. I saw whole thing. I was standing at window when all that happened and because it was mistake and i love you, I forgave you. I was wondering how long you would let your sister make a slave of you.”

Meaning:
If you have Done anything Wrong by Mistake, You should Admit it and apologize for your mistake and do things to Make it Right.

You May Also Like: Nail and Fence Moral Story

One thought on “Admit you Mistakes – Little Boy Story”