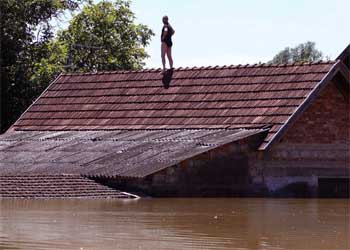 Once a small town was devastated by disastrous flood and it torn downed the whole village and many people died. People who climbed roof of their houses and survived were waiting for help to come.

Some locals who had small boats started to help people to move to dry areas.

There was one religious man who had great faith in GOD and he was one of the survivors from the town and he was alone on his house roof praying and asking GOD for Help believing that GOD will come to help him himself.

He continued praying and then a small boat of rescuers came and asked him to jump into boat and come with them but survivor refused saying that it was too small to take them all and he will wait and believe that GOD will help him and then continued his praying.


Second day again another boat came to help survivors, to take them to safe place. This boat was also kinda small and crowded but bigger than the previous one. Boat stopped by that man house and asked him to jump in but he again refused again and started praying.

Third day, man became physically weak but still his believe was strong that GOD will him and continued to pray day and night.

Kinda of help that person was expecting never came but still even on third day another small boat came and there were only two people inboard. They assured him that he will be send to city safely and its been already three days but again man refused to go with them.

He kept praying and waiting but no one came for rescue after that and after couple of days man died because he got sick and ran out of food.

After death when man got to meet God, he was very angry and asked him, “I believed in you, trusted you and my whole life i devoted my life to you but still when i was in problem dying alone you didn’t came to help me.. why?”

After he was finished God replied, “I know how much you trusted me and believed me and that why i sent you help again and again but every time you refused and at last you died…”

Moral:
Its good to have Faith and Trust that God will Help us but we need to know that We should Act wisely and Understand when God is helping us and What ways he chose to Provide us for what our Need is at that Time.