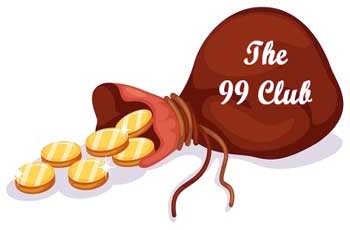 Once upon a time lived a King who was not happy or content despite his Luxurious lifestyle. One day, king saw a servant who was singing happily while he worked. This made king curious about servant joy. King thought to himself that he is Ruler of the Land still he is unhappy and gloomy, while that servant was so much happy.

King asked servant,” Why are you so happy?”
He replied, “Your Majesty, I am just a servant but my family and i don’t need much, just a roof over our head and warm food to fill our hunger is enough.”

Even after knowing servants answer king was not satisfied and sought to ask his most trusted advisor about it. Next day king told his advisor about servant. After listening to whole thing advisor replied.

He said, “Your majesty, I believe that servant has not been part of 99 club.”
King was surprised and inquired, “99 club? What’s that?”
Advisor answered, “Your majesty, If you want to know about 99 club you have to place a bag containing 99 Gold coins and leave it at servant’s doorstep.”


Now the bag of gold coins was placed outside servants house. When servant saw the bag he took it inside and opened it. When he saw gold coins he got really happy. Now he began to count them. After counting he found that there were 99 gold coins in the bag so to confirm it he counted several times.

He thought that, “What could have happened to that last coin as surely no one would leave just 99 coins!”

He looked everywhere but he couldn’t found the 100th coin. Finally he decided that he is going to work very hard and earn one more coin to complete that bag coins from 99 to 100.

From that day life of servant started to change. After few days he started to behave horrible to his family and shouted over them for not helping him to earn that 100th coin, overworked himself just to earn that coin. He stopped singing while working.

King saw all this and witnessed this drastic transformation and got puzzled. He sought for his advisor’s help.

King asked, “Why this sudden change has occurred in his life?”
Advisor replied, “Your majesty, servant has now officially joined the 99 club.”

Advisor continued and explained, “The 99 club is a name given to people who have enough to be happy but are never content, because they always striving and yearning for that one more coin. always telling to themselves that after i get that one final thing then i will be happy for life.”

Moral:
We can be Happy even with little in our Life but once We are given something Bigger we Desire for more and more and for that we lose our Sleep and Happiness.

You May Also Like: King’s Demand and Clever Story Teller.!