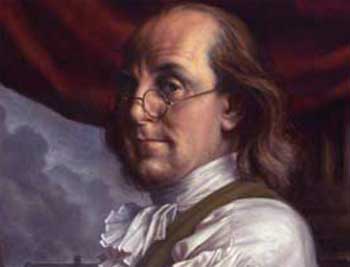 A Learned blockhead is a Greater blockhead than an Ignorant one.

A Man of Words and Not of Deeds, is like a Garden Full of Weeds.

Each year One vicious Habit rooted out, In Time might make the Worst man Good throughout.


He is the Best physician that knows the Worthlessness of the most Medicines.

Having been Poor is No Shame, being Ashamed of it is.

Tricks and Treachery are the Practice of fools, that don’t have Brains enough to be Honest.

Hope and Faith may be more Firmly built upon Charity, than Charity upon Faith and Hope.

Security without Liberty is called Prison.

He who sacrifices Freedom for Security deserves Neither.

Tell me and I Forget. Teach me and I Remember. Involve me and I Learn.

Rather go to Bed without Dinner than to Rise in Debt.

Creditors have better Memories than Debtors.

Common sense is something that Everyone needs, few have and None think they Lack.

To Lengthen thy Life, Lessen thy Meals.

Most men Die from the Neck up at age twenty-five because they stop Dreaming.

The Ancients tell us What is Best but we must Learn of the Moderns what is Fittest.

Employ your Time well, If you mean to get Leisure.

Energy and Persistence Conquer all things.

The Eye of the Master will Do more work than both his Hands.

If you would Persuade, You must Appeal to Interest rather than Intellect.

Hide not your Talents, They for Use were made. What’s a Sun-dial in the Shade?

A Brother may Not be a Friend but a Friend will Always be a Bother.

There is much Difference between Imitating a man and Counterfeiting him.

If you know How to spend Less than you get, you have the Philosopher’s stone.

No Nation was ever Ruined by Trade.

Speak ill of No man but speak all the Good you know of Everybody.

There are Three things extremely Hard: Steel, a Diamond and to know One’s self.

We are all Born Ignorant but One must work hard to Remain Stupid.

He that Falls in Love with himself, will have no Rivals.

Wink at small Faults, Remember thou hast Great ones.

Necessity never made a good Bargain.

The way to be Safe, Is never to be Secure.

In this World Nothing can be said to be Certain, Except death and taxes.

Those that won’t be Counseled, can’t be Helped.

Drive thy Business or It will Drive thee.

If you would be Wealthy, think of Saving as well as Getting.

Do you Love Life? Then do not Squander time, for that’s the Stuff Life is made of.

Genius without Education is like Silver in the Mine.

Being Ignorant is not so much a Shame, as being Unwilling to Learn.

The only thing that is more Expensive than Education is Ignorance.

We are all Born Ignorant but one must Work hard to remain Stupid.

If a Man could have Half of his Wishes, He would double his Troubles.

Happiness depends more on the inward Disposition of Mind than on Outward Circumstances.

The Best way to see Faith is to Shut the Eye of Reason.

He that Speaks Much, is much Mistaken.

Quotes by American: Most Famous Short Quotes by Benjamin Franklin (Must Read)