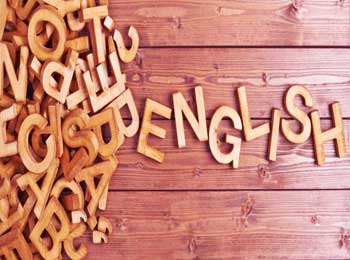 English is One of the Most widely spoken Languages in the World.

English actually Originates from what is now called North west Germany and the Netherlands.

The Language that is Most closely related to English is Frisian.

Old English first came into use way back in the 5th Century AD. The English Language Has Been Developing for more than 1,400 Years.


There are Approximately 1.5 billion English speakers in the World. That’s 20 percent of the World’s population.

More people in the world have Learned English as a Second language than there are Native English speakers.

There are 24 Different dialects of English in the US.

English is the Official Language of the sky. All Pilots speak in English on International flights.

Shakespeare added over a Thousand New words to the English Language.

There are Currently about an Estimated one Million words in the English language.

The first English Dictionary was written in 1755.

Over 80% of the Information stored on Computers worldwide is in English.

‘E’ is the most Commonly used letter in the English language.

More English words begin with the letter ‘S’ than any Other letter of the Alphabet.

The First Number spelled out that contains an ‘a’ is One Thousand.

The word ALPHABET comes from the First two Letters of the Greek alphabet: Alpha and Beta.

The Longest English word that can be spelled without Repeating any letters is ‘uncopyrightable’.

There is No word in the English language that Rhymes with Month, Orange, Silver or Purple.

The Longest word in English has 45 letters: ‘Pneumonoultramicroscopicsilicovolcanoconiosis’.

Due to a Printing Error, there was a word in the English dictionary from 1932 to 1940 which didn’t have a Meaning. The word was ‘Dord’ and it became known as ‘Ghost word’.

‘Pronunciation’ is the word which is most Mispronounced in the English language.

‘Queueing’ is the only word with Five Consecutive vowels.

There are only 2 modern English words that end in -gry: Angry, Hungry.

The most commonly used noun is ‘Time’.

The word ‘Whatever’ consistently Ranks as the most Annoying English word.

The word ‘Goodbye’ is a Contraction of ‘God be with you’.

‘Go!’ is the Shortest Grammatically correct sentence in English.

Many English words have Changed their Meaning over time. Example ‘Awful’ used to mean ‘Inspiring wonder’ and was a Short version of ‘Full of awe’.

The Most Complex word in the English language is ‘Set’. This Small word has over 430 definitions and requires a 60,000 word Definition that covers 24 pages in the Oxford English Dictionary.

There are Nine different ways to Pronounce ‘ough’ in English. This Sentence contains All of them: A rough-coated, dough-faced, thoughtful ploughman strode through the streets of Scarborough, after falling into a slough, he coughed and hiccoughed.

‘The quick brown fox jumps over the lazy dog.’ – This type of Sentence is called a Pangram as it uses every Letter in the English language.

The Most difficult Tongue twister in the English language is ‘sixth sick sheik’s sixth sheep’s sick’.

A Palindrome is a word or phrase that’s Spelled the Same whether you Read left-to-right or right-to-left. An example word is ‘Madam’.

An Ambigram is a word that looks the same upside down as right-side up. An example is the word ‘SWIMS’ with all capitalized letters.

Capitonyms are words which Change their meaning if the First letter is Capitalized. For example: Turkey (the country) and turkey (the bird).

The English language contains a lot of Contronyms – Words that can have Contradictory meanings Depending on Context.

An Anagram is a Rearrangement of the Letters in a word or phrase to form a Different word or phrase. Example, the word ‘Stifle’ is an anagram of ‘Itself’.

Those who Read fiction have a Larger vocabulary than those who do not. Fiction usually contains a Wider range of Vocabulary than nonfiction does.