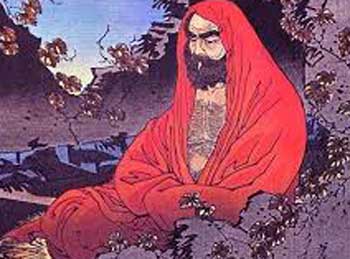 Bodhidharma was a 5th century Buddhist Monk. He is regarded as its First Chinese patriarch. Bodhidharma’s Practice and Teachings are centered on Meditation.

In Order to see a Fish, You must Watch the Water.

The Dharma is the Truth that all Natures are Pure.


As long as you are Enthralled by a Lifeless Form, You are not Free.

The Essence of the Way is Detachment.

Life and Death are Important. Don’t suffer them in Vain.

The Mind is always Present. You just Don’t see it.

Not Suffering another Existence is Reaching the Way.

You can’t know your Real Mind as long as you Deceive Yourself.

To Seek is to Suffer. To Seek Nothing is Bliss.

All know the Way but few Actually Walk it.

As Mortals, we are ruled by Conditions, Not by Ourselves.

Freeing oneself from Words is Liberation.

Not creating Delusions is Enlightenment.

Not engaging in Ignorance is Wisdom.

Someone who Seeks the Way, Doesn’t look Beyond himself.

Regardless of What we do, our Karma has No hold on us.

To Give up yourself without Regret is the Greatest Charity.

All the Suffering and Joy, we Experience depend on Conditions.

Those who Remain unmoved by the Wind of Joy, Silently follow the Path.

Trying to find a Buddha or Enlightenment is like Trying to grab Space.

Neither Gods nor men can Foresee when an Evil deed will Bear its Fruit.

Only One person in a million becomes Enlightened without a Teacher’s Help.

An Awakened person is Someone who finds Freedom in Good fortune and bad.

The Ultimate Truth is beyond Words. Doctrines are Words. They are not the Way.

Many roads lead to the Path but basically There are only Two: Reason and Practice.

Buddhas move freely through Birth and Death, Appearing and Disappearing at Will.

But while Success and Failure depend on Conditions, the Mind neither waxes nor wanes.

And As long as you are Subject to Birth and Death, You will Never attain Enlightenment.