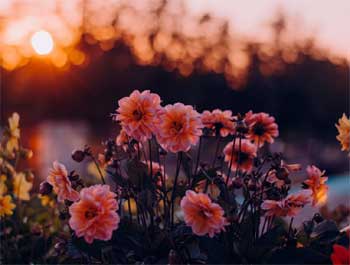 The Largest flower in the world is the Titan arums, which Produce flowers 10 feet high and 3 feet wide. The Flowers smell of Decaying flesh and are also known as Corpse flowers.

Dandelions might seem like Weeds but the Flowers and Leaves are a Good source of Vitamins A and C, Iron, Calcium and Potassium.

Sunflowers move Throughout the day in Response to the Movement of the Sun from east to west.

Blue Cohosh, also known as Squaw root or Papoose root, was used by Native American women to Ensure an Easy Labor and Childbirth.


The very Expensive Spice, Saffron comes from a type of Crocus Flower.

The Lotus was considered a Sacred flower by Ancient Egyptians

Hundreds of years ago, when Vikings invaded Scotland, They were slowed by patches of Wild thistle, allowing the Scots time to Escape. Because of this, the Wild thistle was named Scotland’s National Flower.

Scientists discovered the World’s oldest flower in 2002, in Northeast China. The Flower, named Archaefructus sinensis, Bloomed around 125 million years ago and Resembles a Water lily.

Flowering Nicotiana is related to Tobacco, from which Cigarettes are made.

Flowers of Bamboo are rarely seen. Bamboo releases 30% more Oxygen into the Atmosphere and absorbs more Carbon dioxide compared to other Plants.

The Agave also known as the Century plant spends many years without Growing any Flowers, after which it grows One single Bloom and Dies.This Phenomenon is called being Monocarpic.

Moon flowers Bloom only at Night, Closing during the Day.

The World’s Smallest Flowering plant is the Watermeal or Wolffia globosa. Found all over the Planet, this Bright Green oval plant is about the size of a Grain of rice.

The Slowest flowering plant is the Rare species of Giant bromeliad Puya raimondii, discovered at a Height of 3,960 m in the Bolivian mountains in 1870.

Juliet rose is known as the ‘£3 million rose’ because that’s how much it cost Famed Rose breeder David Austin to create the Apricot-hued Hybrid over the Course of 15 years.

Shenzhen Nongke Orchid, most Expensive flower ever Sold – This Orchid flowers only Blooms once every 4 to 5 years.

The Rainbow Rose is a Genuine rose with Highly Attractive colors. Each Rose petal has one of the Colors of the Rainbow.

The Lotus is a Sacred flower for Buddhists. For Buddhists, the Lotus flower represents Purity of body, mind and spirit.

The Aalsmeer Flower Auction is the Largest of its kind in the World. Around 20 million flowers are Auctioned daily.

There is a Flower that literally looks like a Set of Hooker’s lips and It’s actually called ‘Hooker’s Lips’.

Ghost flower is a Flowering plant with No Chlorophyll.

The Foxglove flower can cause your Heart rate to drop by simply Handling the plant.

Orchids are Flowering plants that do not need Soil to Grow. They get all of their Nutrients from the Air.

Sunflowers produce Toxic substances that Kill other plants around them.

Daffodils are used as Currency for Prince Charles, He is Paid one daffodil a year as Rent for his lands on the Island of Scilly and off the coast of Cornwall.

Floriography, the Language of Flowers. Floriography consisted of an Actual floral Dictionary where the Sender could send Flowers to someone with Encoded messages through the Bouquets also known as ‘Talking Bouquets’.