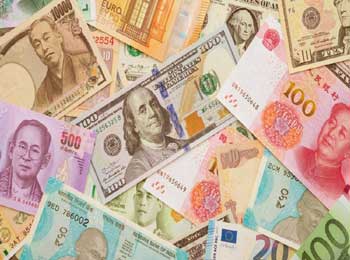 The British Pound Sterling is the World’s oldest Currency, dating back to Anglo-Saxon times.

During the Middle Ages, Knights did not want to carry Cash around because of Robbers. Instead, Knights wore Special rings. When a Knight stayed at an inn, he would Stamp the bill with his Ring. The Innkeeper later took the stamped bill to the Knight’s castle to be Paid.

The First banknotes originated in China, where they were known as ‘Flying Money’ because the Wind could take them so easily.

In Old English ‘pygg’ was a type of Clay that was used for making Jars and dishes that held Money. Over generations, the word Eventually Morphed into ‘Piggy bank’.


The Earliest banks were Ancient religious Temples where people Stored Grain or Precious metals, They used as Money.

Before the Federal Reserve in 1913, Each bank printed its own Money.

Germans used money as Wallpaper. After World War I, Hyperinflation wreaked havoc on the German currency, causing it to Lose almost all of its Value.

The Study or Collection of Money is ‘Numismatics’.

Over 170 different Currencies are used around the World today.

The Vast majority of the Planet’s currency exists in Electronic form. Banknotes and Coins make up just 8% of the Global total.

The Currency most Traded around the world is the U.S. dollar. Other Heavily traded currencies are the Euro, the Japanese yen and the Pound sterling (British pound).

It Costs more than a Penny to make a Penny. It Costs roughly 2.5 cents.

The Ink used to Print money is High tech. So High tech that it has Traceable, Magnetic and Color changing properties.

One of the Most Expensive coins in the World is the 1913 Liberty Head nickel. One Sold in 2010 for $3,737,500. It is so rare because it was Printed by a Rogue mint Employee who made only Five of the coins.

The World’s Smallest note is the Romania 10 bani, issued in 1917 where as World’s Largest was issued in the Philippines to commemorate the Centenary of the Country’s independence.

Queen Elizabeth II holds the Record for Appearing on more Currency than any other Person. Her portrait has appeared on the Currency of more than 30 different Countries.

Star Wars, Pokémon and Frozen coins are Legal tender on the Island of Niue.

The Philadelphia facility is the Largest Mint in the World.

Icelanders use Credit cards and Debit cards more than any other country in the World.

The Most valuable Legal tender coin in the World is a $1 million Australian coin but because it Weighs 1,000 kg and is made out of 99.99% Pure gold, It is worth almost $45 million.

The Government of Hungary printed the Highest denomination ever created in 1946. It Printed a bank note worth 100 quintillion pengoes.

The Largest bill ever Printed was a $100,000 Gold Certificate issued in 1934. They were Never circulated among the General public. They were used for Transactions between Federal Reserve Banks.

The Country with the Worst Inflation in the world is Zimbabwe. In 2008, it Experienced 6.5 sextillion percent Inflation.

A man named Brad Wilson earned 4 million Airline miles for free without Breaking any Laws by using his Credit card to Purchase free delivery $1 coins from the U.S. Mint.

Walter Cavanagh of California is known as ‘Mr. Plastic Fantastic’. He has more than 13,000 Credit cards, the Largest collection in World. He keeps his Cards in the World’s largest Wallet, that is 250 feet long.

Michael Ridge, a Sound artist from Norwich, posted a video on YouTube showing him Playing a Vinyl record with the new £5 note, Creating sound much like a Stylus needle.

North Korea is the Largest Counterfeiter. North Korea has Mastered the Art of counterfeiting U.S. currency, Specializing in a perfect Replica of $50 and $100 bills. Their Fakes are referred to as ‘Superdollars’ and Require Specialized equipment at the Federal Reserve to be Detected.