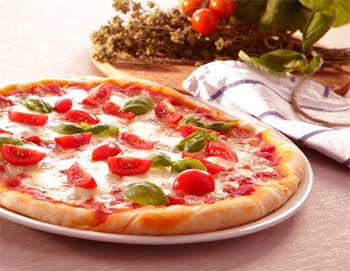 Pizza accounts for more than 10 percent of all Food Service sales.

The word ‘Pizza’ dates back over a Thousand years – It was first mentioned in a Latin text written in Southern Italy in 997 CE.

Roughly 1,000 years ago Herb-and-spice-covered circles of Baked dough grew exceptionally Popular in Naples, Italy. Known as focaccia, these Rounds were served as an Appetizer or a Snack.


In the 1800s, Most Italians thought of Pizza as a Peasant meal. That changed when a Baker named Raffaele Esposito created a Margarita pizza for visiting Royalty.

The Pizza Margherita is named after the Italian Queen Margherita. In Celebration of the Queen’s visit to Naples in 1889, a Popular Pizzeria made a Pizza to match the white, green and red of the Italian flag.

In 1830 Pizza truly began with the Opening of the World’s first pizzeria named Port Alba.

While Pizza was originally invented in Naples, returning American soldiers who Fought in Italy during WWII were responsible for Spreading its popularity throughout the United States.

According to a Poll, Kids between the ages of 3 to 11 prefer Pizza over all other food groups for lunch and dinner.

Dough-spinning has its own Professional-level Sporting event where Pizza teams compete in Acrobatic dough-spinning Competitions at the World Pizza Championships.

There is a Pizza Museum in Philadelphia called Pizza Brain that is home to the World’s Largest collection of Pizza memorabilia.

The Longest Pizza delivery was from Cape Town, South Africa to Sydney, Australia.

Most Expensive pizza created was made by the Restaurateur Domenico Crolla who created a $2,745.00 priced Valentine pizza.

A Restaurant in Alaska, Airport Pizza, delivers pizza by Airplane.

A Hacker group, once Crashed Papa John’s website because the Company failed to deliver a Pizza on Time.

There is a Mathematical theorem named after Pizza called the ‘Pizza Theorem’, the Equation mimics pizza slicing techniques.

The World’s largest Round pizza is 131 feet in diameter .

There are over 34 Million ways to create a single Domino’s pizza.

Domino’s is consistently Among the top 10 companies in Online transactions, a group that includes both Amazon and Apple.

In Cambodia, some Pizzerias offer ‘Happy pizza’ – Pizzas that are topped with High-quality marijuana.

In Scotland, favorite pizza toppings include Sheep heart, liver and lungs, which are Minced with oatmeal, onion, suet, spices and stock. It is known to have a rather Nutty texture.