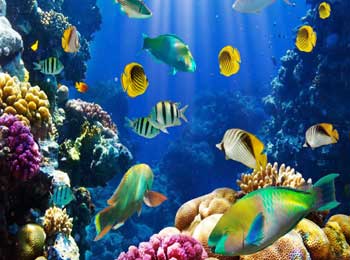 Fossil evidence suggests that Fish have been on Earth for about 530 million years.

Most fish reproduce by Laying eggs. Though some fish, such as Great white sharks, give Birth to live babies called Pups.

There are approximately 32,000 different kinds of Fish in the world today.

Fish would Suffocate if they tried to Chew because chewing would interfere with Water passing over their Gills.


A Fish can drown in Water. Like Humans, Fish need Oxygen, If there isn’t enough Oxygen in the Water, they will Suffocate.

The Oldest known age for a fish was an Australian lungfish. In 2003, it was still alive and well at 65 years old.

Electric eels and Electric rays have enough Electricity to Kill a Horse.

The Oldest Fishhook ever found Dates back to about 42,000 years ago.

Sharks and Rays do not have Swim bladders. They have to Swim all the time even when they are Sleeping. Otherwise, they will Sink to the Bottom of the Ocean.

Lampreys and Hagfish are the most Primitive form of Fish still living today.

A Seahorse can move each of its Eyes separately. One Eye can look Forward while the other looks Backward. Seahorses can also Change their Color to Match their Surroundings and there are the only fish that Swim Upright.

Hagfish are some of the Slimiest animals on Earth. An Atlantic Hagfish can make enough Slime in one minute to Fill a Bucket.

The Fastest fish is the Sailfish. It can Swim as fast as a Car travels on the Highway.

The Slowest fish is a Seahorse. It Swims so Slowly that a person can barely tell it is Moving.

The Most Poisonous Fish in the world is the Stone fish. Its sting can cause Shock, Paralysis and Even death if not treated within a few hours.

The Biggest fish in the world is the Giant whale shark, which can grow to nearly 60 feet. It Weighs over 25 tons and eats mainly Plankton.

Antarctic ice fish, which have Antifreeze in their Blood, Live permanently at -1°C.

Some Desert Pupfish can live in Hot springs that reach Temperatures greater than 113° F.

World’s Deepest fish is believed to be a Snailfish, found in the Western Pacific Ocean at a Depth of 8,145 meters

Anableps, Four-eyed fish can see Above and Below water at the Same time.

Many types of Aquatic animals commonly referred to as ‘Fish’ are not fish examples include Shellfish, Cuttlefish, Starfish, Crayfish and Jellyfish.

The Entire body of a Catfish is covered with Taste buds. Catfish have over 27,000 taste buds where as Humans have around 7,000.

In Japan, Puffer fish, is a Succulent but Lethal delicacy. It contains tetrodotoxin, a Deadly poison. However, it is so delicious that Japanese Gourmets Risk their lives to prepare it.

Sometimes Tornadoes pick up Fish while traveling over Water and Carry them over Land  where the Fish Rain down. These are known as ‘Fish showers’.

Scientists have Explored only 1% of the Ocean depths. They believe Millions of new kinds of Animals and Fish are down there.

In the Dhamma of Buddhism the fish symbolize Happiness as they have complete Freedom of Movement in the Water.