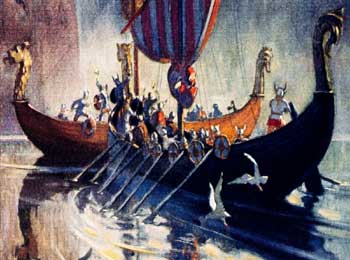 The word ‘Viking’ means ‘A pirate raid’ in the old Norse language.

It is difficult to gather Information about the Vikings because they Never wrote down their own history. Most of what is known about Viking raids and customs comes from what their Enemies documented about them.

There were Four major classes of Nordic societies: Kings, Jarls, Karls and Thralls. Kings were the rulers, Jarls were the noblemen, Karls were the farmers, tradesmen, and builders while the thralls were the slave class.


The Vikings never called themselves Vikings and they did not think of themselves as a United group.

The Vikings practiced Norse Paganism, the Head of their Gods was Odin and Thor.

Vikings had their own system of Law and Order. When the Vikings got together to make Laws and Settle disputes, It was a meeting called the ‘Thing’.

The Vikings are Notorious for their impressive Boat building skills for their time.

The Most prized weapons of the Vikings were their Long swords. They would often Name their Swords. The swords would often be passed down through the Generations.

Vikings have been known to have Fantastic hygiene. Archaeologists have found tweezers, razors, combs and even ear cleaners at excavations sits.

Due to the Beauty ideals of Norse culture, brunette Vikings (often men) would Bleach their hair.

Vikings who would go into Battle in a trance-like state of rage were called Berserkers. It was said that they often Wore bear or wolf skins into battle.

The Majority of Vikings spent their time Farming barley, rye, oats, as well as raising cattle, goats, pigs and sheep on farms just big enough to Support their family.

Only 80% of Viking children Survived past 5 years old. If a child was sick or weakly, the parents would either Abandon the child of throw them in the sea. This was due to the Strong pride Vikings took in strength and power.

Cnut the Great was one of the most Powerful Viking kings. Originally from Denmark, he eventually Ruled over Norway and England as well, Creating what is often referred to as the North Sea Empire.

The Bluetooth symbol is an Old Viking rune – They represent the initials of a Viking King.

Pacifism wasn’t exactly an Option in the Norse world: Viking custom required all free men to own Weapons and they were allowed to be Fully armed at all times. The Quality of one’s gear would reflect their Social standing.

The Vikings invented rap battle during the 5th Known as ‘Flyting’. It is a poetic exchange of insults often targeting cowardice or perversion.

Vikings were fond of Board games. A favorite was Hnefatafl – a Strategy game like chess played on a checkered board using Figurines representing two rival armies.

Scandinavians invented simple Skis at least 6,000 years ago and kept using them through the Viking Age.

The Vikings wrote in an alphabet called Runor and there are thousands of Large stones covered in runes that dot the Scandinavian landscape.

Due to the Norse religion, it was believed that Warriors went to incredible Realms after their death, therefore burying their Dead in boats was common to help reach the Afterlife. In the boats, the Dead were often Sent off with their weapons, jewelry and sometimes even sacrificed slaves.

Viking raids on Christian settlements were so Brutal that many of the Monks and Priests who lived in them thought that the Vikings were sent from God to punish them for their Sins.

Vikings are credited with Founding a number of European Cities. The Irish cities of Dublin, Wexford, Waterford, Cork and Limerick were all prominent Viking settlements.

The National sport of Iceland is Glíma, which is a Scandinavian martial art used by Vikings.