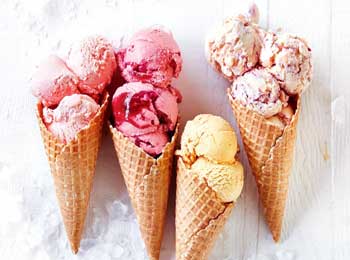 Ice cream was First invented in seventh century China where King Tang of Shang had a group of Ice men create a Cold dessert made from buffalo milk, flour and camphor.

Historians remember that Alexander the Great loved to Eat snow flavored with Nectar and Honey.

People in the Persian Empire saved snow in Underground keeps called Yakhchal and then on Warm days they would Serve the snow with Grape juice concentrate Poured over it.

Until 1800, Ice cream remained a Rare and Exotic dessert enjoyed mostly by the Elite. Around 1800, Insulated ice houses were Invented.


The First commercial factory for making Ice cream was Set up in the year 1851 in Boston city.

Ice cream can be made in Many types. Some are Ordinary ice cream, Frozen custard, Frozen yogurt, Reduced-fat ice cream, Sherbet, Gelato and others.

The Most popular flavor is Vanilla, followed by Chocolate, then Strawberry.

The Popular phrase, “I scream, you scream, we all scream for ice cream” comes from a Song written by Howard Johnson, Billy Moll and Robert King in 1927.

The Ice cream cone was Invented at the St. Louis World’s Fair in 1904, when a Syrian named Ernest E. Hamwi used batter at his Waffle booth to make Cones to help out his Neighbor, an ice cream vendor who had run out of bowls.

John Harrison, a Tester at Dreyer’s Ice Cream, got his Tongue insured for $1 million.

Ice cream testers use Gold spoons to be able to Taste the product 100% without a slight Percentage of ‘after-taste’ from typical spoons.

Ice cream ‘Brain Freeze Effect’ is triggered when Cold ice touches the Roof of your mouth, which causes Blood vessels in the Head to dilate.

Air is added to Ice cream to make it Lighter and improve its Texture. The Amount of air added Determines the Quality of an ice cream.

According to Nasa, Ice cream is among the top three items most missed by Astronauts on Space flights.

The World record for ice cream Eating is 1.75 US gallons in Eight minutes.

The Tallest ice cream Cone measures 3.08 m in Height and was achieved by Hennig-Olsen Is AS and Trond L Wøien at Kristiansand, Norway, on 26 July 2015.

The Most ice cream Scoops Balanced on a Cone is 121 and was achieved by Dimitri Panciera (Italy) in Forno di Zoldo, Italy, on 20 September 2015.

The Most Expensive ice cream and Dessert is The Frrrozen Haute Chocolate ice cream Sundae costing $25,000.

The Largest ice cream Sundae ever made was made in College Station Texas, where approximately 4,000 people both Made and Ate the entire dish in under 30 minutes.

American bombers during WWII made ice cream on their Missions by strapping Buckets of cream to their planes, which would then Freeze in the High altitudes as they flew over Enemy territory.

In 1945, the US military built the First floating ice cream Parlor for the sailors serving in the Pacific during WWII.

When town leaders in Evanston, WY, made it illegal to Sell ice cream sodas on Sundays, Shop owners invented the ice cream Sundae. They Replaced the Soda with Syrup to get around the law and they replaced the ‘y’ in Sunday with an ‘e’ in order to Avoid offending Religious leaders.