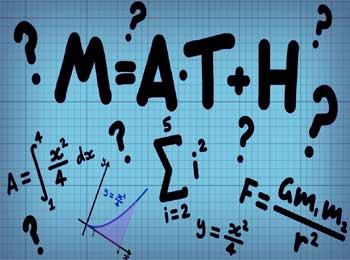 Arabic numerals, like the ones we use today in English, were actually invented in India.

Abacus is considered the Origin of the Calculator.


Zero ( 0 ) is the only number which Cannot be represented by Roman numerals.

An Icosagon is a Shape with 20 sides.

A Palindrome is a number that Reads the same Backwards and Forward, e.g. 12421. All Palindromes with Even Number of digits are divisible by 11.

‘Four’ is the only number in the English language that is Spelt with the Same number of Letters as the number itself.

Most Mathematical symbols weren’t invented until the 16th century. Before that, Equations were written in Words.

Markings on Animal bones indicate that Humans have been doing Math since around 30,000BC.

The Symbol for division (÷) is called an Obelus. On the Other hand, the division slash (/) is called Virgule.

The Symbol for Infinity (∞) was used by the Romans to represent 1000.

Richard Recorde is Credited with inventing the Equal sign (=) in 1557.

The Product of two primes can Never be a Perfect Square.

The Difference between the time of a Sundial and a Standard clock is called ‘The Equation of time’.

The Numeral 4 is associated in Japanese and Chinese cultures with ‘Death’ that’s why many Chinese hospitals do not have a 4th floor.

Ancient Babylonians did Maths in base 60 instead of base 10. That’s why we have 60 seconds in a Minute and 360 degrees in a Circle.

2520 is the Smallest number that can be Exactly divided by all the numbers 1 to 10.

The Largest prime number ever Found is more than 22 million digits long.

Highest accuracy calculations at Nasa use just 15 decimals of Pi.