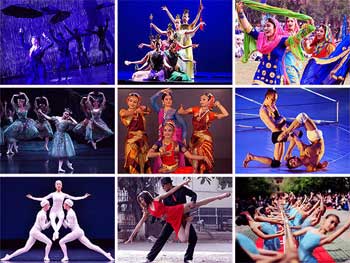 In Ancient Greek mythology, Nine muses were associated with each one of the Arts. Terpischore was the Muse of Dancing.

One of the Earliest uses of Structured dance was introduced in Religious Ceremonies that told the Stories of ancient myths and Gods.

In many Religions, such as Buddhism and Hinduism, Dance is a part of Worship and Dancing figures are often found in Shrines and Temples.


In Different regional forms of Classical Indian dance like Bharata Natyam, Kathak – Dancers wear Heavy anklets of multiple bells called Ghungroo which highlight and Emphasize the Rhythms of the Dancer’s feet. Dancers can wear up to 200 Bells – 100 on each Ankle.

Originating in the 1970s in the Bronx, Breakdancing was created as a ‘Less Lethal’ form of Fighting.

African Slaves transported from Brazil were prohibited from Practicing martial arts, so they Created a dance form called Capoeira.

‘Rumba’ is from the Spanish word rumbear, meaning to have a Party or a Good time. It’s the Slowest of the Latin dances and has its Roots in Religious and ceremonial

For over 1,000 years, the Japanese performed a Battle dance called Onikenbai or Demon sword dance that involved Stomping on the Ground to ward off Evil spirits.

The ‘Gumboot’ dance originated in the Gold mines of South Africa because the miners were Forbidden to Talk, they communicated by Stomping their feet and Slapping their boots which Evolved into a form of Dance.

The ‘Whirling Dervishes’ are famous for the Unique whirling dances, which Symbolize the Rotation of the universe in the Presence of God.

The word ‘Waltz’ comes from Waltzen, which is German for Glide or turn. Initially, the Dance was declared Shocking and Sinful.

Lion Dance is one of the most popular Religious and Ceremonious dances in China and surrounding countries of Taiwan, Korea and Japan. This Dance can signify bringing of Good fortune, Ward of evil spirits and be an Excellent showcase in Martial arts proficiency.

The most Sensual dance of modern times is Tango. It originated from 1890s Argentina but it quickly became very successful in Europe.

The Leotard is named after its Inventor, Jules Leotard, a French Acrobat who performed the First flying Trapeze act in 1859. He wore his Tight fitting wear to Show off his Muscles.

Some Pop singers Create their own Dances to fit their Songs. For example, Michael Jackson created the ‘Moonwalk’ for his hit ‘Thriller’ in 1982.

In some parts of Southern and Western Africa, dancers perform on Stilts up to six feet high. Their dance Symbolizes that the Key to human Wisdom is finding the Right balance.

Michael Flately of Riverdance holds the Record for the World’s highest paid dancer, Earning $1.8 million a week at his Prime. His Legs were Insured for $44.7 million.

In 1998, the Largest tap dance on Record occurred when 6,952 tap dancers Tapped in Stuttgart, Germany.

The most Curtain Calls ever for a Ballet was 89, after Rudolf Nureyev and Margot Fanteyn performed their 1964 Swan Lake in Vienna.

Ballerina Pierina Legnani performed 32 Fouettes (extremely fast turns on one foot) as Odile/Odette in Swan Lake. No one has Broken her Record.