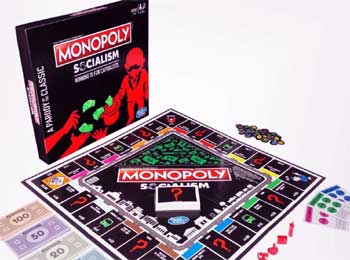 The Original game was made from Materials from Darrow’s own Home. A Piece of oilcloth covered the board and the Cards were Handwritten.

The original Monopoly die-cast Tokens were Inspired by Darrow’s nieces who recommended Metal charms from Charm bracelets be used.

Darrow attempted to Sell Monopoly to Parker Brothers but was Initially rejected for “52 fundamental errors” that included the Game’s Length, Theme and Complexity.


Following the Local success of the Game, Parker Brothers reconsidered its Initial rejection and Negotiated the rights to market the Game.

On Record, the Longest game of Monopoly ever played lasted 70 Straight days.

In 2008, nearly 3,000 Monopoly fans around the World united to Set the World record for the most people Playing the game at the Same time.

The Monopoly game is currently Published in 47 languages and Sold in 114 countries.

Iconic characters in the Monopoly game include the Tycoon Mr. Monopoly, Jake the Jailbird and Officer Edward Malloy.

The Total amount of Money in a standard Monopoly game is $20,580.

To keep Games Shorter, a Speed Die was introduced into the Standard game in 2008.

Escape maps, Compasses and Files were inserted into Monopoly game boards Smuggled into POW camps inside Germany during World War II. Real money for Escapees was slipped into the Packs of Monopoly money.

In the 1970’s, a Braille edition of the Monopoly game was created for the Visually impaired.

In 1978, the Neiman Marcus Christmas Catalog offered a Chocolate version of the Monopoly game priced at $600.

In 1988, San Francisco jeweler Sidney Mobell created the Most Expensive Monopoly set in the World, consisting of 18 and 23-karat gold and 42 diamonds. It was Valued at $2 million.

Every few years, National Champions from around the Globe meet for the Monopoly World Championships tournament.

Under The Boardwalk: The Monopoly Story, a Documentary about the Monopoly game, Debuted in 2010 and Won an Emmy award.

In 2014, the ‘My Monopoly’ game allowed players to Personalize their own Game at home with their own Photos.

Monopoly was Introduced for the iPhone in 2008. Digital versions of the Game are available for all Major platforms and online through Collaborations with Licensees such as Ubisoft and EA.

Monopoly at McDonald’s encourages you to Save tokens from your Meals to win Big prizes like a car, on an instant win like an apple pie.

There have been more than 300 licensed versions of the Monopoly game developed themed with topics such as Sports teams and Movies including Disney, Lord of the Rings, Game of Thrones, The Walking Dead and many more.

The Monopoly 80th Anniversary Edition game Features one iconic token from each of its Eight decades including the Bathtub, Locomotive, Money bag, Cat, Cannon, Cavalry and Monopoly World Championships trophy.