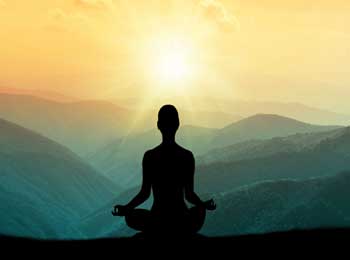 One of the Earliest records of Meditation is a Wall art found in the Indus region that dates back to 3500 BC. The Artwork shows people meditating in a Classic yoga pose with Crossed legs and hand Resting on knees.

Scholars agree that though Meditation didn’t appear to become a Practice until it became part of Buddhism 2,600 years ago.


Mediation is practiced in Judaism, Hinduism, Jainism, Sikhism and Buddhism.

General wellness is the Number one Reason people take up Meditation.

Meditation can be Practiced in Four positions: Sitting, Lying down, Standing or Walking.

Of the Various types of Meditation, the following Six are the most Popular: Mindfulness, Spiritual, Focused, Movement, Mantra and Transcendental.

The World Parliament of Religions held an event in Chicago which is seen as a Real turning point. It was thought to be the First time that Western audiences had been taught about Meditation by Asian spiritual leaders.

The First Meditation hall was opened in Japan in 653 CE. Dosho, a Japanese monk, opened the hall after Returning from China where he studied Buddhism.

One of the Most common and Sacred symbols in the Meditation Tradition is the Om or Aum. Om represents the Consciousness of the universe condensed into Sound.

A common Meditation symbol is the Mandala, which is a Geometric construction of Points, Lines and Shapes that symbolize the Universe. It acts as a Visual point of Concentration and Symbolizes the sound of Creation, the Om.

Practitioners of Meditation use a Mantra (a word or phrase) to Help Focus their Thoughts.

Chakra meditation Focuses on placing the Seven chakras of the Body in Harmony. The word ‘Chakra’ is Sanskrit for ‘wheel’ which symbolizes Smooth movement, Power and Harmony.

Meditation can change your Brain to improve Memory and Concentration.

Because Meditation Stimulates the Neocortex and Reduces stress, it can profoundly Enhance creativity and innovation.

While Meditation benefits both Genders, Women show greater Decreases in Negative thinking and Greater increases in Self-compassion and Mindfulness.

The Brains of longtime Meditators are less affected by Aging than the Brains of those who do not Meditate.

Meditation can be a more Effective Painkiller than Morphine. Meditation as a painkiller works by Calming the somatosensory cortex in the Brain while Inciting activity in other parts of the Brain’s.

During deep Meditation monks can Raise the temperature of their Toes and Fingers by as much as 17 degrees Fahrenheit.

Disney were one of the First companies to introduce Meditation in to the Workplace. They were quickly Followed by many others including Google, Apple and Nike who now offer a variety of Different Meditation courses to their Employees.

Spiritual Guru, Ashutosh Maharaj, who Passed away in 2014 is being Stored in a Freezer as his Followers believe he is simply in a Deep Meditative state.

Deepak Chopra, MD, Set the World Record for the Largest online meditation in History. According to the Guinness team, 33,061people (both physically present and via live-stream) Meditated together for 30 minutes.