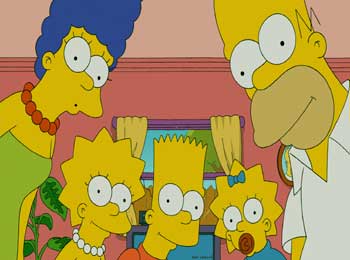 The Simpsons first Aired on December 17, 1989 and has been running for Longer than any other Scripted prime time TV series.

The Fox Broadcasting Company Owns the Rights to the show until 2082.

Although the Show is currently owned by Fox, the Producers have Permission to write without any input or hindrances from Fox. This is Why the Show often makes fun of the TV network.

Each episode takes Six to Nine months to Complete.


Danny Elfman composed the Famous Simpsons theme tune in 1989 and it took him just Two days to Finalize.

The Simpsons were Created to have Yellow skin in a bid to Attract attention.

In 1997, The Simpsons Surpassed The Flintstones as the Longest-running Prime-time animated series when it Aired it’s 167th episode.

Many of the characters names are family and relatives of show creator Matt Groening including Homer, Marge, Lisa, and Maggie, which are the Real names of his Parents and Younger sisters. The Family name Wiggum comes from Groening’s Mother’s Maiden name.

In the Opening credits, the Cash register shows $847.63 when Maggie is ‘Scanned’, a figure that was taken from a Survey that said that this was the Average monthly cost of Caring for a newborn baby.

Bart is one of the Most well-known characters in The Simpsons. Bartholomew Jojo Simpson was more commonly known as Bart, an Anagram of the word ‘Brat’.

Matt Groening’s initials Appear on Homer’s face in Every episode.

While designing the Characters, Matt Groening purposely gave each of them a Different shape so that they could be Recognized by their Silhouette.

‘Do the Bartman’, the Single by Bart Simpson, was co-written by Michael Jackson.

The Famous d’oh was written in the Scripts as an ‘Annoyed grunt’.

During the years that The Simpsons has been airing, over 240 other shows have Debuted and Ceased to air on the network.

The Simpsons was Named the Best series of the entire twenty-first century by Time magazine in 1999.

There is not just One version of The Simpsons. An Arabic version was also Created, in which Homer is known as Omar.

When The Simpsons Movie premiered, 20th Century Fox made a Deal with convenience store chain 7-Eleven to transform twelve of their shops into Kwik-E-Marts.

The Couch gag in the Opening credits is actually used to Adjust the show’s Running time. If the Writers have produced a show that Runs a little long or short, they can simply make the Couch gag ensure that Everything ends up running the Proper amount of time.

While recording Homer’s “I Am So Smart” song, Dan Castellaneta spelled S-M-R-T wrong by Accident but the Producers thought it was so Funny that they kept it in the Show.

Paul McCartney only agreed to Participate if Lisa remained a Vegetarian for the Rest of the show.