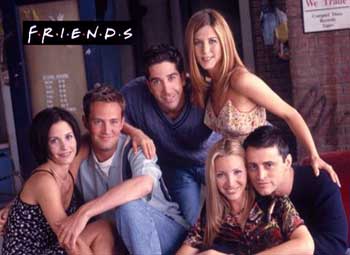 The show was Originally going to be titled Insomnia Cafe. Once NBC bought the pilot, the Title was changed to Friends Like Us. By the Time the show aired, they had landed on Friends.

The Opening of the show has a Fountain was actually shot on the Warner Bros. lot in Burbank, California.

When the Show aired, Courteney Cox was the most Famous cast member, having appeared in Several commercials

When the Show was being written, the Character of Ross was written with Schwimmer in mind. It came as no surprise when Schwimmer was the First actor to be Cast in the show.


Though she eventually became the Show’s biggest star, Jennifer Aniston was the Last actor to be cast of the Six main cast members.

When Friends began in 1994, the Cast started off making $22,000 an episode. The Cast of friends was the first to Negotiate their salaries as a group. By the end of the Final season, they were making a Million dollars per episode.

Producers initially offered Courteney Cox the role of Rachel but she Convinced them to let her play Monica instead.

Just like her Character Monica, Courteney Cox is a Neat freak. Apparently, she used to Clean the other cast members Dressing rooms because she didn’t like to go in them when they were Messy.

Ten seasons without fail, the Cast of friends huddled up for Good luck just before shooting the show. That’s ten years and 236 hugs.

Matt LeBlanc had only $11 to his Name when he was cast as Joey. The first thing he bought himself was a Good meal.

Joey’s not-so-rapid-fire brain cells were not a part of the Original script. It was a Choice that Matt LeBlanc made in the audition and the producers liked it.

When Perry told producers he was Defensive and Awkward around women, producers wrote it into the script. Chandler’s sarcastic wit was also authentic to Perry. In fact, he was the only one of the Friends who was allowed to sit in with the Scriptwriters of the show. They often use his Jokes and Suggestions to punch up the show.

Matthew Perry had to go to Rehab twice during the show’s run.

When Kudrow first read the Script, she thought Mathew Perry’s character was supposed to be Gay. Thus, all the Jokes about Chandler being gay.

The First time Mathew Perry got on the cover of People Magazine, he sent it to one of his Old teachers. Dr. Web once said to him in high school that He would never Amount to anything if he didn’t stop Joking all the time.

Lisa Kudrow was Afraid of the duck that appeared on the Show.

When Lisa Kudrow got Pregnant with her son, the writers decided to Write her pregnancy into the show by having Phoebe act as a Surrogate for her brother’s triplets.

Apparently, Lisa Kudrow hated playing the Guitar and wanted her Character to play the bongos instead. Producers stayed firm, however and insisted on the guitar.

Courteney Cox also got pregnant towards the End of the show with her daughter but the writers didn’t write that into the show because they had already Established that Monica and Chandler couldn’t have kids.

All the Main cast members have Kissed each other at one point or another on the Show. The only two that never Shared an on-screen kiss were Monica and Phoebe.

Ross and Rachel’s drunken Wedding took place in Caesars Palace. The same place where producers took the cast just before the show Aired for the first time. They wanted the Friends gang to enjoy their last taste of anonymity.

For Chandler, Janice was a loud, Obnoxious habit that was hard to quit and her Surprise appearances were always kept a secret from the Live audience. Actress Maggie Wheeler was hidden in her Dressing room and then behind a black screen so the audience wouldn’t catch on.

The Fridge’s in both apartments actually Worked and were filled with snacks. But apparently, the one in the girls’ apartment was always better stocked than the boys’. Just like in real life.

The Statue of the big, white dog from Joey’s bachelor pad actually belonged to Jennifer Aniston.