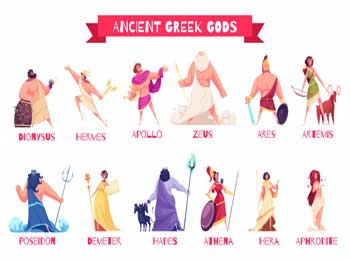 The Oldest surviving sources for Information on the Greek gods are The Iliad and The Odyssey by the blind poet Homer.

According to the Greek myths, the Ancestors of the Gods were the Titans.

The Greatest challenge the Greek gods ever faced was brought against them by Gaia, who basically got Sick of whoever was in Charge and Plotted to overthrow them.

Cronus, the father of half the Greek gods was overthrown, he was imprisoned with the other titans. As interpretations went on, his sickle became a scythe, and he became associated with the harvest.


Zeus’s most prominent symbols were the Thunderbolt, the eagle, the bull and the oak tree. In Ancient Greek art, Zeus was usually Depicted as either sitting down on a throne or walking forward while holding a thunderbolt over his head.

According to the Myths, Zeus and his brothers Drew lots to decide who would rule which parts of Existence. Despite being the youngest brother, Zeus became ruler of the Earth and the sky, Poseidon got the Sea and Hades ruled the Underworld.

Hera proved a truly Frightening antagonist to Heracles. When he was a Newborn infant, she sent Two poisonous serpents into his crib to kill him, only for Heracles to use his Immense strength to strangle the Serpents to death.

Hera only got over her Hatred of Heracles when he Saved her, as well as the other gods, from the Giants. Hera even offered her Daughter, Hebe to be his bride when he took his spot among-st the Immortals.

Hades, the God of the Dead, also gave his name to the Underworld itself. Regions of the underworld included Tartarus, Elysium and the Asphodel Meadows.

Because he was the God of the Dead, Hades was a Terrifying figure to those who Worshiped him with the other Gods. Whenever they Sacrificed to him, they Averted their faces.

Dionysus isn’t just the Youngest of the Greek gods, he was also Born to a Mortal woman.

Apollo was the God of the sun and was also the God of medicine, healing, music, the arts, archery and prophecy. His Symbols were the bow and arrow, the raven, the lyre and the snake.

Apollo’s son, Asclepius, became even more affiliated with Medicine than his dad. He was such a Skilled physician that he could reverse death. Asclepius personal staff, Entwined by serpents, has become the Symbol for medicine in the Western world to this day.

One of the most Enduring aspects of Apollo’s legacy is the Oracle at Delphi. People would travel all across the ancient world to Consult the oracle on their problems or concerns for the future. Apollo was said to possess the High priestesses and answer through them.

Because Uranus was Immortal, he couldn’t be Killed but he also couldn’t create Life anymore, which meant he simply remained as the Embodiment of the sky.

Hestia was the Goddess of the Hearth, maintaining the Fire of the gods. Therefore, whenever the Ancient Greeks burnt a Sacrificial offering to the Gods, No matter which God it was, Hestia would receive part of the Tribute.

Aphrodite’s son was called Eros, and he was the Winged god of lust and love, Piercing people’s hearts with darts or arrows. The Romans knew him by a different name – Cupid.

It turns out that the Oldest of the Greek gods, at least by age, is actually Aphrodite.

Releasing the Cyclops from imprisonment turned out to be one of Zeus’s best ideas. Skilled smiths, the Cyclops forged powerful Weapons for the gods to use in their war against the Titans.

The Reason why the Seasons exist is because of the famous Abduction of Persephone, the daughter of Demeter, the Goddess of the harvest.

Aside from Earth, nearly all the Planets in our solar system are named after the Roman versions of Greek gods. These planets are Mercury (Hermes), Venus (Aphrodite), Mars (Ares), Jupiter (Zeus), and Neptune (Poseidon).

Ares and Athena, the God and Goddess of war, didn’t get along at all. Athena represented military strategy, generalship and bringing intelligence into the Act of war where as Ares embodied the Mindless savagery of war, embracing the violence and bloodshed with unbridled glee.

Everyone knows about Ares, the God of War but few have heard the chilling stories about his Dark sister – Eris, the Goddess of Chaos and Strife – whose scheming initiated the most Cataclysmic event in Greek history: The Trojan War.