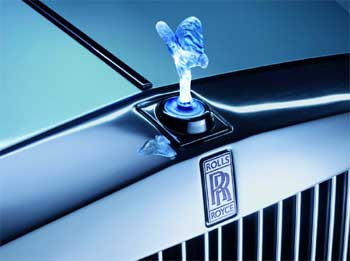 The very First Rolls-Royce vehicle was Hand-built by Henry Royce back in 1904.

Sir Henry Royce made the Initial engineering sketches of that Engine while on a beach. He was Walking with his top Engineers.

The First Rolls-Royce model Ran a ridiculous 14,371 miles almost Non-stop, back in 1907. They Drove it back and forth between Glasgow and London 27 times.

After a Fateful 1904 meeting at the Midland Hotel in Manchester, Aristocrat Charles Rolls agreed to Purchase all of the vehicles that Royce created and thus, Rolls-Royce was Born.

In the early 1930s, with the Backing of the British Air Ministry, the Company decided to attempt to Create an engine that would power the Fastest Aircraft, known as the R Type engine

The R airplane engine was the Fastest thing on Earth. It Powered a Supermarine S6B to over 400 mph back in 1931 and won the Ultra competitive Schneider Trophy air race.

When BMW Bought Rolls-Royce in 2002, Volkswagen owned the Rights to the Ornament. BMW paid $40 million so that they could make Rolls-Royces with the Winged lady on the front.

Under an Agreement dating back to the 1950s, Rolls-Royce makes its own Nuclear reactors for British submarines with some U.S. tech help, In Exchange for RR helping the U.S. make subs a little Quieter.

Royce invented the Adjustable shock absorber while on his Deathbed. He drew up some plans, Handed them to his nurse and Died the next day.

Rolls-Royce jets Power everything from Gulfstreams and 777s to British Harriers.

They didn’t build their Own Bodies until after WWII. Like many early manufacturers, RR would build the Best chassis they could put the Best Engine they could in the Chassis and let Specialized coach builders Handle the body.

The Company produced top-of-the-line Vehicles for nearly 70 years, before Financial troubles caused the Company to be Reorganized and Relaunched as two Separate companies: Rolls-Royce Plc and Rolls-Royce Motors Limited.

About 65% of all Rolls-Royce cars ever produced are still on the road today.

The Rolls-Royce Phantom IV was produced for and Sold only to Royalty or Heads of state. Just Seventeen of these cars were sold and Sixteen of them are now preserved in Museums or collections.

Any Pin-striping on any Rolls-Royce created since 2003 was put there by a Single man. Mark Court.

There are More Rolls Royce’s in Hong Kong than anywhere else in the World.

Connoisseurs of Pristine upholstery, would rave about the fact that Rolls Royce only uses Bull hides for upholstery since Female cattle are Prone to getting stretch marks during Pregnancy. That’s just a Glimpse of the Impeccable detailing.

The Rolls Royce grille of the early cars were Built completely by hand and lined up by eye by a Craftsman who would Inscribe his initials on it.

The Prevalence of chauffeur-driven Rolls-Royces has led the company to introduce a Training program to complement the Experience of their more Affluent customers. Known as the White Glove training program, it seeks to Train future chauffeurs on Etiquette and Driving behavior.