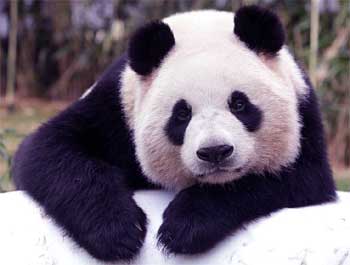 Pandas have Lived on Earth for two to three Million years.

Many Chinese philosophers Believe that the Universe is made from two Opposing forces, the Yin and Yang. The Panda is one symbol of this Philosophy with its Contrasting black and white fur.

In China, Giant pandas are considered to be National Treasures.

Giant pandas do not Hibernate because their Bamboo diet will not allow them to Build up enough Fat reserves for the winter.

Giant pandas have a very Good sense of Smell. Even at night, they can find the Best bamboo stalks by Scent.

Male Pandas do a Handstand while Peeing to Mark trees.

With few Natural predators to be Afraid of, Giant pandas are not Picky about their Sleeping Locations.

Giant pandas are Born white and Develop their black and white coloring Later.

Giant pandas are good at Climbing trees and can also Swim.

Although 99% of their Diet is Bamboo, a Panda’s Digestive system is designed for Meat. Pandas absorb only 20% to 30 % of Bamboo nutrients because of this Panda has to Eat most of the Time it is awake to get enough Nutrients to Survive.

A Giant panda has one of the Highest bite forces of any Carnivore.

A Giant panda usually gives Birth to a Single cub. Sometimes twins are born but when this happens, the Mother typically ignores the Weaker cub. She does not have Enough energy to Care for two cubs.

Giant pandas are born Blind and are approximately 1/900th of the Size of their Mothers.

Young pandas stay with the Mothers for as long as Three years, which Means that a Wild panda may raise only three or four cubs in a Lifetime.

Keeping even a Single Panda in a zoo is Expensive. A Panda costs Five times more to keep than the next most Expensive animal, an Elephant.

Giant pandas have been the Symbol of the International conservation organization ‘World Wide Fund for Nature’, Since it was Founded in 1961.

After Richard Nixon visited China in 1972, He Received two Pandas from the Chinese leader, Chairman Mao. The two Pandas, Ling-Ling and Hsing-Hsing, were placed in the National Zoo in Washington D.C.

Pandas have been a Symbol of Peace in China. Hundreds of years ago, Warring tribes in China would Raise a flag with a picture of a Panda on it to Stop a battle or Call a truce.

The Chinese once Hunted Giant pandas because they Believed that its Pelt provided Magical protection against Evil spirits.