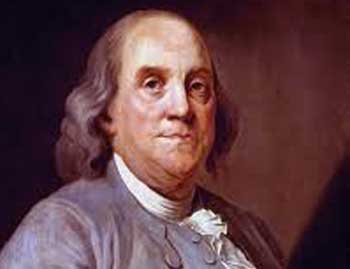 Without continual Growth and Progress, such words as Improvement, Achievement and Success have No meaning.

Remember not only to say the Right thing in the Right place but far more Difficult still, to Leave unsaid the Wrong thing at the Tempting moment.

If a Man Empties his Purse into his Head, No man can take it away from him. An Investment in Knowledge always pays the Best interest.


There are in Life real Evils enough and it is folly to Afflict ourselves with Imaginary ones, It is Time enough when the Real ones arrive.

If You would not be Forgotten, as soon as you are Dead and Rotten, Either write things worth Reading or do things worth the Writing.

To the Generous mind the Heaviest debt is that of Gratitude, When it is Not in our Power to Repay it.

He that is of the Opinion money, will do Everything may well be Suspected of doing Everything for Money.

Life, like a Dramatic piece, should not only be conducted with Regularity but it should finish Handsomely.

Be at War with your Vices, at Peace with your Neighbors and let Every new year Find you a Better man.

They who can give up Essential Liberty to obtain a little Temporary safety, Deserve neither Liberty nor Safety.

Whoever would Overthrow the Liberty of a Nation must begin by Subduing the Freeness of Speech.

The Constitution only gives people the Right to pursue Happiness. You have to Catch it yourself.

It seems to me, that if Statesmen had a little more Arithmetic or were Accustomed to Calculation, Wars would be much less Frequent.

Man and woman have each of them Qualities and Tempers in which the other is Deficient and which in Union contribute to the common Felicity.

It is a Common error in Friends, When they would Extol their Friends, to make Comparisons and to Depreciate the Merits of others.

The Art of getting Riches consists very much in Thrift. All men are not equally Qualified for getting Money but it is in the Power of Every one alike to practice this Virtue.

Our Opinions are not in our own Power, They are Formed and Governed much by Circumstances that are often as Inexplicable as they are Irresistible.