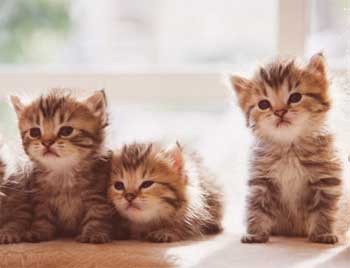 Cats are the World’s most popular Pets, outnumbering Dogs by as many as three to one

Cats cannot Detect Sweetness that’s why they are not Drawn to it at all.

The Average cat can Jump 8 feet in a single bound, nearly Six times its Body length.

Cats only use their Meows to talk to Humans, not each other.


A Cat’s Nose is as Unique as a Human’s Fingerprint.

Cats will Refuse an Unpalatable food to the point of Starvation.

Despite popular belief, Many cats are actually Lactose Intolerant.

Cats find it Threatening when you make Direct eye contact with them.

A Cat’s hearing is better than a Dog’s. And a cat can hear High-frequency sounds up to two octaves Higher than a Human.

A Cat has the Ability to rotate their Ears 180 degrees with the Help of 32 muscles that they use to Control them.

A Cat rubs against people not only to be Affectionate but also to mark out its Territory with scent glands around its Face.

Cats Hate the Water because their Fur does not Insulate well when it’s Wet.

Most Cats Sleep around 16 hours a day. One reason that kittens Sleep so much is because a Growth hormone is Released only during sleep.

Cats use their Long Tails to balance themselves when they are Jumping or walking along Narrow ledges.

Some Cats have Survived falls of over 65 feet, due largely to their ‘Righting reflex’. The Eyes and Balance organs in the Inner ear tell it where it is in Space so the cat can Land on its feet.

With up to 70 percent of their Lives dedicated to Sleep, Cats are among the most Frequent sleepers in the Animal world.

A Cat has the Power to sometimes Heal themselves by Purring. A Domestic cat’s purr has a Frequency of between 25 and 150 Hertz, which happens to be the Frequency at which Muscles and Bones best Grow and Repair themselves.

Cats prefer to Remain Non-confrontational. They will Not fight to show Dominance but rather to Stake their Territory.

The Biggest Wildcat today is the Siberian Tiger. It can be more than 12 feet Long and Weigh up to 700 pounds.

The Most popular Pedigreed cat is the Persian cat, followed by the Main Coon cat and the Siamese cat.

The Tiniest cat on Record is Mr. Pebbles, a 2-year-old cat that Weighed 3 lbs and was 6.1 inches High.

During the time of the Spanish Inquisition, Pope Innocent VIII condemned cats as Evil and thousands of Cats were burned. Unfortunately, the Widespread killing of Cats led to an explosion of the Rat population, which Exacerbated the Effects of the Black Death.

You May Also Like: Cat’s Competition (Tenali Raman Story)